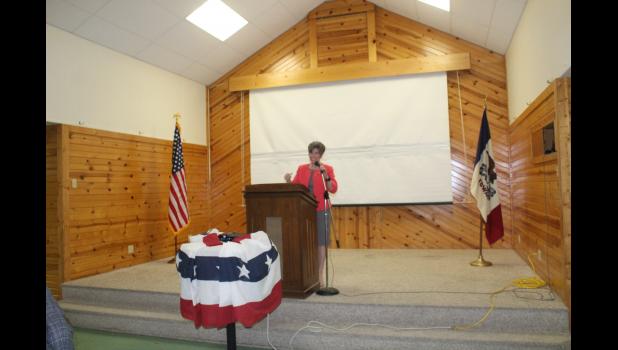 By:
Marcie Klomp News Editor tpdeditor@crescotimes.com
CRESCO - The old adage “the more the merrier” certainly held true for the April 11 Howard County Business & Tourism Banquet.
Besides all the staff and board members of HCBT getting a pat on the back for  their hard work, the venue also featured awards, Sen. Joni Ernst and Cresco’s RAGBRAI® theme reveal!
• Alison Holten, vice president of HCBT, spoke about how economic development has changed over the past 20 years. Then all ideas were kept secret and not shared with others. Each community or county was a silo. Today, ideas are shared because if one community is succeeding, it leads to regional success.
• Three prestigious awards were presented by Times Plain Dealer Publisher Dan Evans at the Expo Center. Awards included Organization of the Year, Citizen of the Year and Hall of Fame inductees.
Those organizations and individuals receiving the awards are usually unsung heroes for  Howard County, but are now being rcognized. Their unselfish volunteerism makes them an example of what can be accomplished by a few.
Lime Springs Children’s Theatre Troupe was named Organization of the Year. Directors Rita Roberts and Janet DeVries accepted the award. Roberts noted the directors enjoy watching the youth come out of their shyness while on stage. It also teaches them responsibility.
Wendy Schatz, principal of Notre Dame Elementary, was named Citizen of the Year. She told audience members, “You are the ones who should be honored,” because if not for everyone helping, nothing could be achieved.
Former editor of the Times Plain Dealer, Ken Becker, was named to the Hall of Fame. He said, “I couldn’t have done it alone. It was a lot of fun.”
• HCBT Director Jason Passmore then introduced the featured speaker, Sen. Ernst, saying, “That’s a tough act to follow.”
Ernst agreed but said she would do her best. “As the junior senator from the great state of Iowa, I know that it takes a dedicated community with dedicated servants to make a community great.” One of her talking points was working on rules and regulations. “If it doesn’t make sense, we need to go back and re-think it.”
She concluded by giving her four pillars of success.
1. Assuming prudent risk.
2. Leadership. “All of you here are leaders.”
3. Service. “That doesn’t just mean military service. It also means being a Sunday School teacher or volunteering for the theatre troupe.”
4. Gratitude. Everyone needs to express gratitude to their communities.
“We have a lot of work to do in the United States Senate. Coming here shows me it is truly worthwhile.”
• Passmore spoke on some of the achievements of Howard County Business & Tourism and Howard County in general over the past year.
~ Regional Health Services completing its $16 million improvement project
~ The Ag Education Center
~ Shopko, which is a great community supporter
~ In Riceville, CATapult Center for entrepreneurial shared space and a lodging and restaurant facility at the golf course
~ Dollar General moving to a bigger space
~ LimeSprings Beef getting new life
~ Elma with housing developments
~ Chester with new business
~ Flood recovery effort
~ Working with 20 different entrepreneurs
~ Having $400,000 in Revolving Loan Funds being utilized in the county
~ Partnership with NICC
~ Freedom Rock project
• In conclusion, Katie Ferrie of the RAGBRAI® Publicity Committee showed a video, which ultimately revealed the theme Cresco will be working with for the July 27 overnight stay: Pedal to the Paranormal.
Great things are happening in Howard County. Locals just need to let go and allow others to see how great it is to be from Northeast Iowa!
[Articles on each of the winners of the Times Plain Dealer awards will be featured in the next few weeks.]