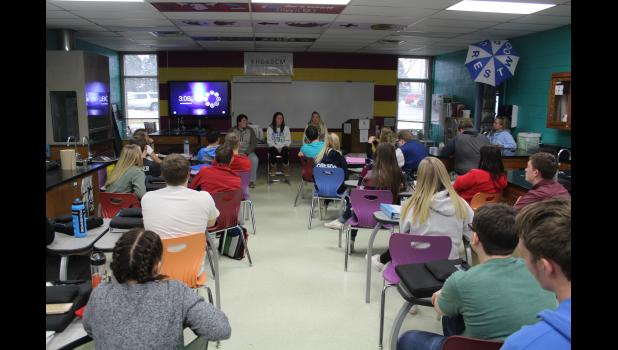 By:
By Marcie Klomp ~ News Editor tpdeditor@crescotimes.com
Cresco - Juniors and seniors at Crestwood High School were given a great opportunity to learn from their peers on what to expect at college.
Alumni speakers included Ellie Friesen (Class of 2018), Kaylie Henry (2017), Kolby LeFebvre (2015), Kaylee Thomas (2018), Maddie Steffen (2018) and Ryan Steffen (2018). They spoke in the chemistry classrooms. Last year, they spoke in the auditorium to the entire class, but staff wanted to try a smaller venue.
Chris Rogne, 7-12 principal, said, “Having alumni come to speak is one effort to help prepare our students for postsecondary readiness. Obviously, we want a rigorous curriculum that prepares students for the demands of college. Hearing from recent graduates and having them share their experiences, is one way to hopefully help prepare juniors and seniors for what they will be facing in the future.”
He added the winter break is a great time to get alumni to speak with high schoolers. Rogne noted graduates sometimes stop in to see teachers and other staff on their break. “So we put them to work,” he joked.
Two groups of three spoke with high schoolers. In the afternoon, Friesen, Henry and LeFebvre spoke in Mrs. Liz Siepker’s classroom.
They started out with explaining where they are attending college. Henry started at University of Iowa and found the smaller college of Mount Mercy fit her nursing career better, so she transferred.
Friesen is attending South Dakota State, while LeFebvre is a senior at University of Iowa.
Differences between high school and college
Friesen stated, “You’re not going to get to retake a test in college.” She said students better know their stuff before the test.
LeFebvre said, “The things we learned here helped. But you need to take thorough notes and test yourself, test yourself, test yourself.”
Friesen agreed, “Some classes in high school, you could memorize the content for tests. That doesn’t work in college. There is a lot more studying and homework.”
Larger classes, with 150-300 students in each, was a culture shock for the alumni. They had to learn a different way to study.
Henry said, “My biggest transition was the way classes were set up. You don’t have somebody to hold your hand, and you don’t have parents pushing you. You become an actual adult! And you have to do your schoolwork first. Learn to say ‘no’ to your friends.”
Friesen added, “The biggest difference is being on your own. In college, there is no one telling you to do your homework. You have to make your own schedule. All my classes are in the morning.”
LeFebvre said, “You get to do your own thing. You need to learn time management. In high school, you wake up at 6 a.m. and work out. You go to school from 8-3 and then go to a job or participate in extra-curricular activities. In college, you are done at 11 and have a lot of time to yourself.”
Another item hard for him to admit was needing help. “In high school, I never needed extra help. It just came to me.  At first I thought I was too smart for tutors. In college a tutor is your savior!”
Advice for juniors/seniors
Henry suggested, “Try to get study skills as soon as you can. That was hard for me. And get time management down. Get a planner — even you boys — you’re gonna need one.”
Friesen noted, “Figure out what school is best for you. If you want to go to a community college first, that’s okay. That costs $2,000 per year, where as you will be paying $18,000 per year at a university.
LeFebvre told the students, “Challenge yourself to take one test and one test only. Juniors, take as many college credit classes as you can.”
All three alumni were thankful for NICC. Friesen and LeFebvre both had all their credits from the local community college transfer to their current college. Henry had most of hers transfer. It was also mentioned since the community college courses are not as difficult as university classes, the general education classes taken locally help with the secondary grade point average.
Classes
Taking classes in college is much different from high school. Each graduate takes about five classes, which meet on different days. Friesen tries to take her classes early in the week since she misses them later in the week when she has cross country and track meets.
She also tries to take her tests ahead of meets so she doesn’t have to worry about them.
Neither Friesen nor LeFebvre schedule classes on Fridays.
Henry has most of her classes in the morning, so she can work in the afternoon.
LeFebvre suggested getting a moped or bike to get to classes. One of his was a 25-minute walk from his room.
The interaction with the college students was an eye-opening experience for the high schoolers and hopefully gave them some insight into what to expect in the next year or two.
Rogne added, “When the students hear from their peers, they tend to believe them more than hearing from an adult.”