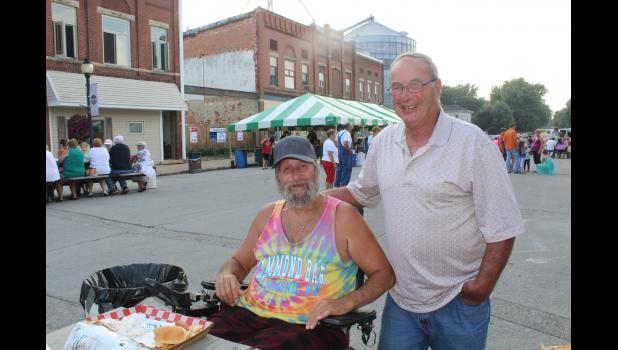 By:
Marcie Klomp News Editor tpdeditor@crescotimes.com
Lime Springs - “I was outside working on my old car. I heard someone yelling for help. I can’t believe I heard him, because I am hard of hearing,” Ed Hampe of Old Town said about that day around the Fourth of July.
Earlier, Richard Curtis made his daily trip to the Upper Iowa River with his dog, Harley, on the four-wheeler. The dog loved to stand on the front and, as Curtis got closer to the water below the dam, would bark at the fish.
The former Navy man had been making the trip to Old Town for about two years. On that particular day, the river was up a little bit, and he decided to go upstream a little. Bad move.
He got too close to the edge, and the four-wheeler found a 15-foot hole that sucked him in. The vehicle spun three times in the water, landing upside down. Harley was always tied to the four-wheeler to keep him from jumping in the water. Curtis tried to lift the machine out to give the dog a chance to escape, but quickly lost strength.
He tried to swim out, but he has been paralyzed from the waist down since 1999 and kept getting sucked under.
“I went back to my UDT (Underwater Demolition Team) training. I went down to the bottom and did the backstroke underwater to get to the side,” he related.
Then he started yelling for help. “I was hoping someone would hear. I have a whistle (on my wheelchair and four-wheeler) but it was under the water.”
That’s when Hampe heard him, got in his truck and tried to find the source. What he found was a man on the edge of the river with the wheels of a four-wheeler sticking up about six inches out of the water. The first thing Curtis asked for was a phone to call his wife, Janet, and daughter, Candy Niewoehner.
Hampe helped Curtis get out of the water. When the wheelchair arrived, he helped Niewoehner get him in the chair. She said, “I’m thankful Ed was able to hear him. It might have been a while before we started looking for him.”
“I hit my head a bunch of times, and one bump still is tender a month later,” Curtis said. A few days after the accident, he found bruises all over his body.
After losing Harley, the family now has a new puppy.
The victim and hero met for the first time after the accident on Thursday of Sweet Corn Days. Curtis and his family were happy to thank Hampe for his help.