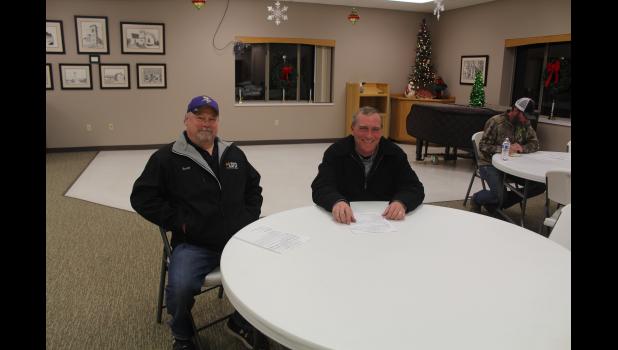 By:
Marcie Klomp ~ News Editor tpdeditor@crescotimes.com
LIME SPRINGS - Scott Osmundson was introduced as the new Lime Springs Fire Chief, as Nate Schwickerath (serving eight years as chief) retired at the end of the year. He plans to help out for the next month to make it a smooth transition.
“I am leaving the department in good hands,” the former chief said.
Osmundson told council, “Thank you for putting your trust in me. I’ve been a firefighter for 17 years and was a past chief for LeRoy for three years.” He has also been a part of the Lime Springs Department for a year.
New year, new officers — Osmundson is Chief for 2022; Tary Kolek is Assistant Chief; Matt Leverson is Training Officer; Dan Gibbs is Medical and Safety Officer; and Levi Hart is Secretary.
New Fire Board members are President Mike Leverson and directors Truman Thomas, Tary Kolek, Jason Hammon and Cody Bakken.
Lime Springs is hosting the FireFighter I classes on Mondays and Thursdays. Testing will take place in March.
The Lime Springs and Chester departments used grant funds to get a new gear extractor, a washing machine the reduces exposer to cancer-causing toxins. “It is set up in Chester since they had a better spot for it,” said Schwickerath.
The department planned to pick up live Christmas trees on Jan. 8 as a public service.
It was announced the dance and raffle was taking place on Jan. 15, with many locals donating to both.
Dec. 26 accident
The biggest event in Lime Springs over the Christmas holiday was when a car crashed into a utility pole across the alley from Brown Park on Dec. 26 at 2:10 a.m.
Lime Springs is in Alliant Energy’s service area. When the Howard County Sheriff’s office called the company, dispatch was told it was MiEnergy’s territory. In the end, MiEnergy dispatched their lineworker, who showed up before Alliant Energy, which had to come from Mason City.
It took one-and-a-half hours before LSFD could extract the second occupant of the vehicle. Schwickerath told council members, “That’s not acceptable.”
The council was not happy with the time either.
In response, Alliant Energy’s Melissa McCarville, Senior Communications Partner, stated, “Around 2:10 a.m. on Sunday, Dec. 26, 2021, a vehicle accident occurred at the intersection of W. Merrill and Lincoln Street in Lime Springs, Iowa, causing a downed electrical pole.
“Upon notification at approx. 2:30 a.m., Alliant Energy immediately responded by locating and dispatching employees closest to the remote scene. Alliant Energy crews arrived on-site as quickly as possible and within the hour of notification to cut power and provide a safe scene for first responders.”
In addition, Chester and Lime Springs experienced a lengthy outage on Dec. 16-17.
Chester Fire Chief Jeff Wendel is waiting for a response to his questions about the incidents.
Lime Springs Council will be asking MiEnergy President/ CEO Brian Krambeer to the next monthly meeting on Feb. 1. Members, along with Chester Council and Lime Springs and Chester Fire Departments, are hoping to reduce the utility response time from Alliant Energy.
Krambeer said of the crash, “While this accident clearly was not in our service territory, we did send a lineworker to assess the situation and provide some necessary assistance.”
MiEnergy is part of the Southeast Minnesota Energy Co-op, which purchased Alliant Energy’s territory in southern Minnesota in 2015. MiEnergy, based out of Cresco and Rushford, Minn., delivers the power to Chester and Lime Springs, but Alliant services the two towns.
Three years ago, MiEnergy tried to purchase the service to Chester and Lime Springs, but did not come to an agreement with Alliant.