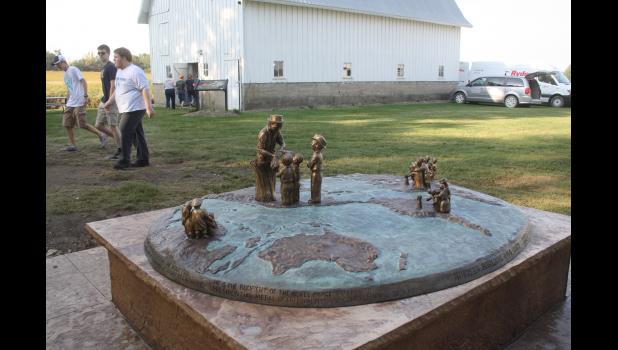 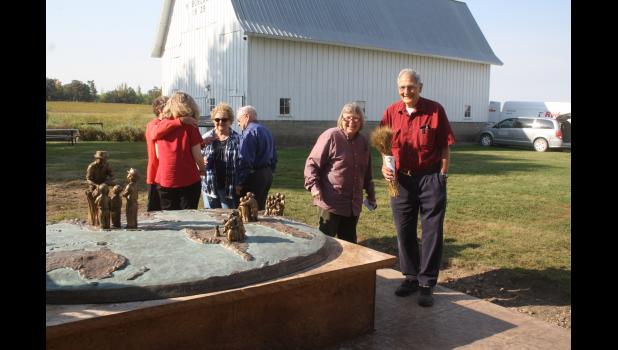 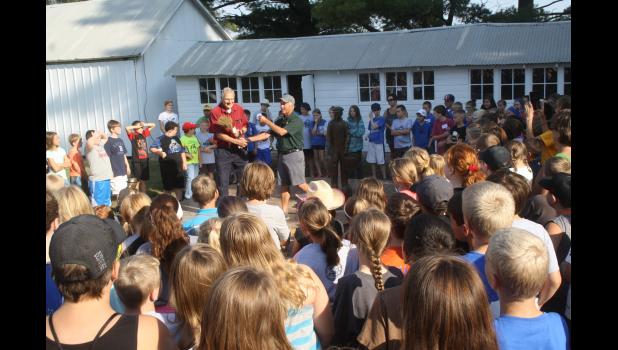 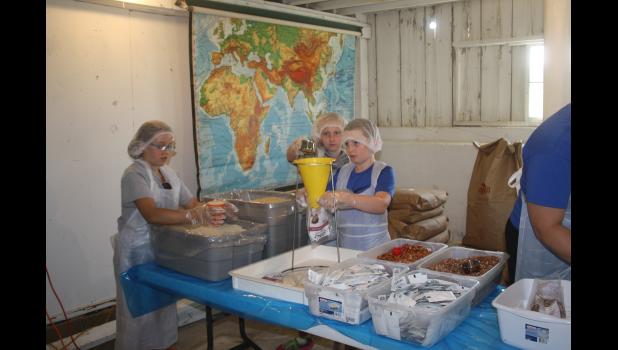 By:
Marcie Klomp News Editor tpdeditor@crescotimes.com
Rural Protivin - William Faller of Kewaunee, Wis. was so impressed with the life story of Dr. Norman Borlaug, he offered to make a pair of sculptures depicting the humanitarian’s life.
The second of those statues was dedicated at a ceremony on Sept. 15 during the 10th Annual Fall Inspire Day, which was witnessed by several hundred fourth grade students. They came from South Winneshiek, Osage, Riceville, Turkey Valley, CFS Catholic/DeSales Catholic, Notre Dame and Crestwood.
Faller didn’t start out as a sculptor. He was a physician at St. Mary’s Hospital in Green Bay, Wis., specializing in pathology. When he retired in 2003, he started looking into restoring two country schools. During his research, he learned about the one-room school house on Borlaug’s Boyhood Farm.
“The more I learned, the more impressed I became of this man. I contacted the board and suggested I could do a sculpture,” Faller said. The board told him they couldn’t afford to purchase the sculpture and he explained he planned to offer it to them!
He told the students, “I read about Norman Borlaug and the experiences he had in his early life. He had a broad background. He didn’t have a PhD. He was a good speaker.”
When long-time board member Tom Spindler introduced Faller on Friday, he explained the pairing of the two statues. The first showed a young Norman, who fed the chickens. The second shows the man he became, the man who fed the world. The smaller statues stand on their home continents depicting the people Borlaug helped in his lifetime.
The sculptor
How did the physician-turned-sculptor get the bronze statue built?
He first became infatuated with statues as his great-uncle made sculptures. When he passed away at a young age, Faller’s grandmother displayed them in her home.
For this latest sculpture, Faller started about three years ago. It was cast in bronze by Jeff Adams of Mt. Morris, Ill. The figures were all cast separately and “the world” on which the figures sit was made up of six sections, welded together by Adams.
In addition to the two Borlaug statues, Faller has made a fireman for his local fire department in Kewaunee and another of a boy and girl, which is at Odebolt, Iowa.
Faller said one of his favorite stories about Borlaug was when he was probably in his first year of school. Coming home from school in a snowstorm, he fell and wanted to give up, but the others wouldn’t let him. “You have to try. You can’t give up,” Faller took away from the story. “His value system is something you learn from your parents and those around you.”
Inspire Day
Audrey Christensen of the Osage school was applauded for receiving the 2017 America’s Farmers Grow Communities $2,500 donation, which she designated for the Norman Borlaug Heritage Foundation.
The students were then able to attend 10 different sessions that were taught by students and staff from Iowa State University. It is the school’s 10th time helping with the fall Inspire Day.
The statues
Wording around the base of the chicken-feeding statue:
• The man who fed a billion people.
• Nobel Peace Prize 1970
• Norman Borlaug 1914-2009
• Teacher
• Student
• Dedicated
• Competitive Athlete
• Forester
• Agronomist
• Geneticist
• Plant Pathologist
Wording around the base of the world statue:
• Norman Borlaug 1914-2009
• Beginning in 1944 he created hybrids of wheat in Mexico from seeds supplied by agronomists from many countries.
• He taught Mexican boys how to help with pollination and some of these boys became agronomists.
• His wheat hybrids had six seeds/spikelet six stems/plant resistance to leaf and stem rust and drought.
• He donated and fostered the use of his hybrid wheat seeds worldwide, increasing wheat yields that prevented starvation in many lands.
• His methods enhanced the development of grain seed research centers world-wide.
• He was instrumental in creating the World Food Prize, awarded annual to enhance sustainable food resources.
• He is the recipient of the Nobel Peace Prize - 1970, Presidential Medal of Freedom - 1977 and Congressional Gold Medal - 2007.