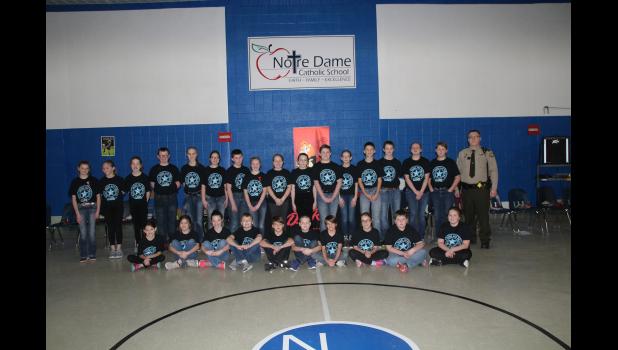 By:
Nate Troy Sports Editor
By Nate Troy
Sports Editor
CRESCO - Sixth grade students at Notre Dame Elementary School in Cresco graduated from the D.A.R.E. (Drug Abuse Resistance Education) program on Monday, Jan. 15. Several students, teachers, Cresco law enforcement members and parents attended the event.
A total of 26 students from Teresa Zeimetz’s sixth grade class graduated from the program. They included: Dominic Bigalk, Samuel Brace, Chyann Bullerman Yu, Elise Church, Lucy Drees, Ava Ferrie, Brayden Henry, Eve Houdek, Kaylee Johnson, Ella Keller, Cody Kerian, Macie Mashek, Aspen Ollendick, Robert
Ollendieck, Paige Pecinovsky, Konner Quam, Parker Rice, William Schrage, Kinze Shea, Dylan Shelton, Kyleigh Smith, Gwenyth Sopha, Isaac Tucke-Wenthhold, Joey Vobr, Mason Vrba and Paighton Zemola.
Following the Pledge of Allegiance, Lead Teacher Renee Cuvelier led the group in a prayer of blessing and thanks. After the prayer, Howard County Deputy Sheriff Richard Hollenbeck addressed the students, teachers and parents in the crowd. Hollenbeck has taught the D.A.R.E. program to students in Cresco for the past four years.
“I’m grateful to be here,” Hollenbeck said. “We are fortunate to have Police Chief Tim Ruroden, Officer Shannon Cox and Deputy Sheriff Tim Beckman from the police department join us today. I also want to thank Notre Dame for letting me teach here, for letting us use the gym for graduation and I want to thank the Notre Dame staff.
“This is my fourth D.A.R.E. graduation. I’m glad to be doing this. Notre Dame has some fun kids. It’s good to see the class sizes at Notre Dame growing, and hopefully, they will continue to grow.
“The kids are not difficult to manage in the classroom because they are very respectful kids. It’s great the sixth graders can do this program, and it shows what Notre Dame has got going for the kids,” Hollenbeck said.
He added the program is fun and educational for the students.
“The kids learned a lot,” Hollenbeck said. “Hopefully, what I’ve taught the kids through D.A.R.E. helps them to become better people and citizens. Also, the program helps to break down the barrier between the police and the children. We (the police department) want the kids to feel comfortable around us and come to us if they have a problem.”
Hollenbeck added that after teaching a few lessons to the kids, he felt more comfortable around them as well.
Following his speech, Hollenbeck told the crowd the sixth graders have prepared a few skits to illustrate what they’ve learned in the program. He added that all the sixth graders wrote essays about the program, and he selected the top two.
“It was difficult to read 26 essays and pick only two as the winners because all the essays were very good,” Hollenbeck said.
Before Hollenbeck announced the top two essays, Sixth Grade Teacher Teresa Zeimetz gathered the students who performed five skits for the crowd.
“For our skits, we are going to demonstrate the five resistant strategies (to avoid drugs) by role-playing pressure situations that anyone might face,” Zeimetz said.
The first skit was called, “Avoid the Situation.” It involved students discussing their after school plans and avoiding places where people might use drugs.
The second skit was titled, “Strength in Numbers,” which explained that it’s good to be with a large group of people doing positive activities.
The third skit was titled, “Walk Away.” This explained kids should just walk away from possible bad situations.
Skit number four was called, “Say No and Give a Reason of Excuse,” which means that kids can say no to drugs and give a reason why, such as they have other plans.
The fifth skit was called, “Changing the Subject,” which noted kids can talk about something different if they are offered drugs.
Hollenbeck noted it is good for kids to have several strategies they can use when they are faced with difficult situations. Zeimetz then addressed the crowd.
“Thank you to everyone who is responsible for bringing D.A.R.E. into the classroom,” Zeimetz said. “It’s an awesome program. I also want to thank our D.A.R.E. Officer Richard Hollenbeck for taking time out of his schedule to come to our classroom to teach the kids something they will use throughout their lives.
“The lessons were well-prepared. They taught the kids how to respect themselves by staying drug-free, and how to make safe and responsible choices. All of the essays the students wrote were outstanding,” Zeimetz said.
Hollenbeck encouraged all the parents to read the students’ essays before he announced the top two. The second place went to Kinze Shea, and Ava Ferrie earned first place. After the top two were announced, both students read their essays to the crowd.
Renee Cuvelier addressed the students, teachers, parents and officers in attendance. After thanking everyone for their support of the program, she offered a challenge to the students.
“When I think of the word dare,” Cuvelier said, “I think of someone among my peer group who says, ‘Hey, I dare you to (do something).’ I also think of the popular Christmas movie, ‘A Christmas Story.’ when the main character Ralphie narrates, ‘Now it was serious. A double-dog-dare. What else was there but a triple-dare. And then, the coup de grace of all dares the sinister triple-dog-dare. Well, sixth graders, I have a triple-dog-dare for you. Dare to be great.
“I dare you to be the nice kid. The one who makes good decisions even when those decisions set you apart from the crowd. Not every decision you make will be the popular one, and not everything that is popular is a good decision.
“Speaking on behalf of other adults who were in your shoes, we only want what is best for you and your lifetime of happiness. We are here to support you in your good decision-making endeavors so that you can choose to do positive things without involving alcohol, drugs or smoking,” Cuvelier said.
Following Cuvelier’s speech, Hollenbeck handed out D.A.R.E. graduation certificates to all the sixth graders.