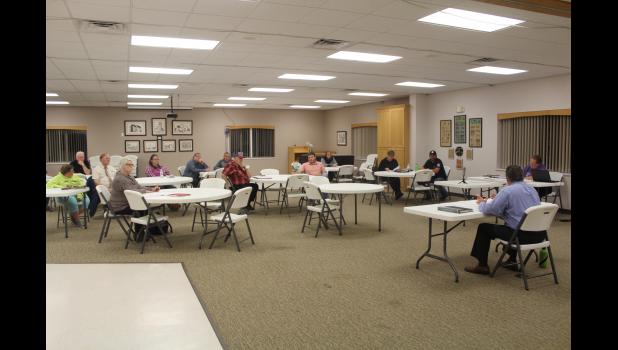 By:
Marcie Klomp ~ News Editor tpdeditor@crescotimes.com
LIME SPRINGS - Pastor Jeff Jacobs got permission from City Council to put up Little Pantry that St. Paul Lutheran’s Church and United Methodist Church are prepared to stock with non-perishable food items and paper goods.
“People can get items at any time at the free-standing pantry,” said Jacobs. “We are going to try it at the Community Center first.”
• In other business, Fire Chief Nate Schwickerath passed on some good news for the community. “We added several First Responders over the last year — Michelle Rice, Milford Loewen, Arnie Zimmerman and Kelsey Schumacher. In addition, we have three more retirements — Barb Robinson (with seven years), Tony Roberts (35) and Ted Roberts (30).”
Activities included participating in Fire Prevention Week with Spring Ahead Learning Center students visiting the fire station and assisting with a search call in Chester.
• Eddie Miller reported for the library with a Halloween party and magic show on Oct. 10 and a silent auction during the month of October.
• There were no reports for Pool & Park Board or Community Center Board (except an upcoming meeting to discuss Christmas in Lime Springs).
• Public Works Director Tyler Smith said he had winterized the pool. For tree trimming, he and Deputy Maintenance Worker Jerry White were going to trim trees in the near future.
He also approved building permits for Jesse Brennon for a privacy fence and Johnson Farms for replacing and adding concrete pads. “They are putting in a scale, too.”
Smith also made Council’s night by telling them how he rigged up a system to apply dust control to the streets himself. “Bob from Hawkins (a chemical company) noticed the dust. He asked if we had a 250-gallon tank.” Smith was able to make a boom to lift a tank in and out of the truck to apply the product.
“It’s not the prettiest thing,” he said, “but it should work.”
• City Clerk Jane Tibbals told council the Tienter property has skunks and raccoons living in the debris.
Steve Jenkins is still waiting on paperwork from the City Attorney to sell the other building to the City. That paperwork has to be signed and the check cashed before anything can be done.
• Council officially approved the 28E agreement with the County to start moving forward with the Merrill St. Bridge project. Mayor Chris Chilson and Tibbals will sign the papers in Cresco and get them notarized.
The agreement allows the City to back out of the agreement if the cost of the culvert exceeds what has been estimated.
• The City is waiting to see what funding may be available for Jackson St.
• The Spring Ahead Learning Center lease was put on hold on a month-to-month basis.
• Tibbals explained that after some research, she learned the City cannot use any of the American Rescue Plan Funding on roads.
She went on to say she received a letter certifying the RISE grant is completed. The grant was given to put in a road at Innovation Drive.
To get the grant, Upper Iowa Beef had to get 50 new jobs and have an average wage of $14.97. The company has done much better, getting 76 new jobs and averaging $20.11 per hour.
• Lidtke Mill Bingo is coming to Lime Springs. It will start on Oct. 11 at the Fitness Center. Doors open at 5:45 p.m. with the event being held from 6:30-9:30 p.m. The proceeds will go to six organizations in the Lime Springs area.
• Oct. 9 was the due date a vicious dog in town had to leave city limits.
• Council authorized the mayor to sign the Northeast Iowa Community Action’s Water Utility Vendor Agreement.
The street financial report and regular financial report were unable to be completed and will be explained at the Nov. 2 meeting.