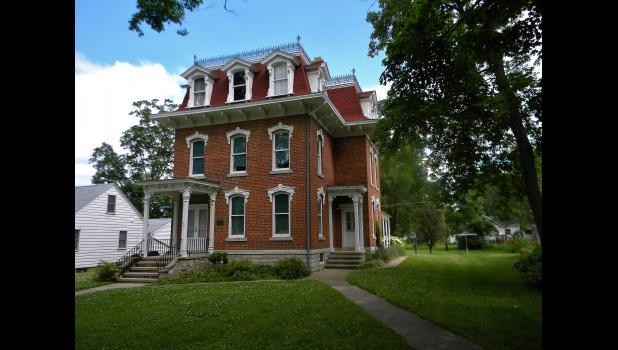 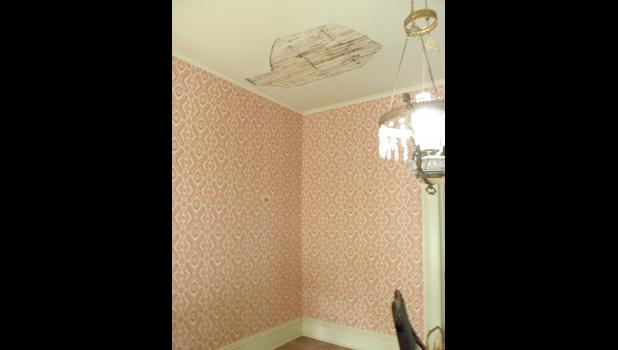 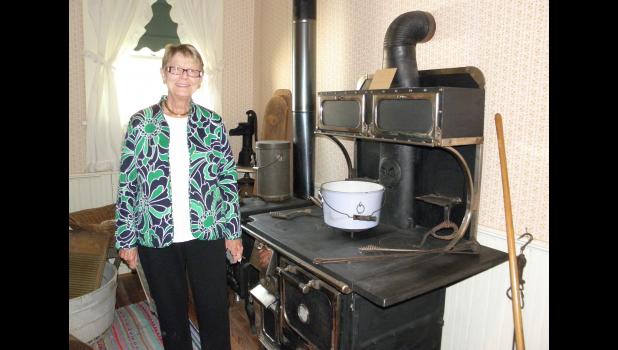 By:
Beki Groenwald TPD Staff
CRESCO - The Kellow House Museum holds an ice cream social every year during the celebration of the Norman Borlaug Harvest Fest, but this year things got a little more exciting than usual. With a turnout of around 50 people — one of their best — the social was just winding down when a corner portion of the parlor’s plaster ceiling collapsed with a bang.
Barb Prochaska, President of the Howard County Historical Society, was standing closest to the collapsed section and reported that no one was injured. An heirloom green couch did sustain some surface damage, and many photographs on the wall below and a spinning wheel were moved to other areas of the house to protect them.
In 1977, the Kellow House was listed on the National Register of Historic Places, something that comes with rules and regulations about how damage like the collapsed ceiling can be repaired.
For example, the Historical Society currently has David Wadsworth of Decorah rebuilding 23 windows in the museum with the right type of wood and glass.
“He [the restorationist] even re-does the ropes and everything so they will all still work,” Prochaska said.
The ceiling repair will need to be done with similar care to the house’s original construction.
“We’ve been looking for someone who can do plaster work,” Prochaska said. “We had contacted someone to come and look at it, but they still haven’t come.”
According to Prochaska, the rest of the house is stable, and the ceiling collapse will not significantly impact the museum inside. People can still come and tour the Kellow House, there’s just a few pieces in the parlor that are temporarily displaced until the repairs on the ceiling are completed.
If you’d like to tour the Kellow House, you can do so by appointment. Call the Cresco Welcome Center at 563-547-3434 or Barb Prochaska at 563-419-3160. Donations are also being accepted to help with repairs.
Kellow House history
CRESCO - The Kellow House was built in 1880 by William J. Kellow, Jr.
Originally from Cornwall England, William Kellow, Sr. and his family emigrated to the United States in 1853 and settled in Howard County in 1856. William Jr. was five-years-old. William Kellow, Sr., was a local farmer and stone mason. William Kellow, Jr., went into the grocery business in 1873.
Kellow Grocery was on North Elm Street for a total of 73 years. William Jr. and his wife, Charolette, lived in the Kellow House for 68 years until Charolette’s death in 1948. William Kellow, Jr. died shortly thereafter.
“In 1949, the Kellow House was sold, and it was used as a rooming house and apartments,” Prochaska said. “Then, in 1969, the Howard County Historical Society bought it and restored it to its original one-family purpose.”
The Kellow House itself is a Second Empire style design with an unusual roof. The Mansard roof, named after the French architect who designed it, was a clever way to avoid taxes. In the 1800s in France, houses were taxed on space from the floors to the roof line, so the Mansard roof allowed for three stories of house while only being taxed on two.