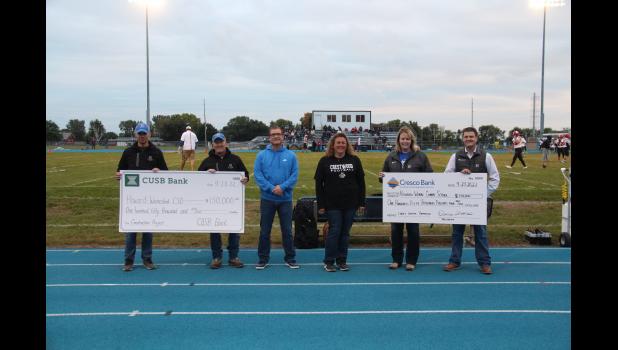 —Funds going to help pay for the addition project
CRESCO - The “Cadet Capital Campaign” officially kicked off before the homecoming game on Friday, Sept. 23.
The campaign is to help support Howard-Winneshiek’s current building project to connect the existing elementary/junior high and high school building.
The project includes a new alternative learning center, weight room, auxiliary gym, wrestling room, locker rooms, storage, training rooms, coaches offices, officials rooms, corridor, creating new classroom space and vestibule.
Supt. Kris Einck stated, “Our goal is to raise one million dollars. Representatives from both CUSB and Cresco Bank & Trust presented checks in the amount of $150,000 to Board Chair Alison Holten and myself between the JV and varisty games.”  Both banks have pledged this amount over a five year time span at $25,000 annually.
Andy Ludeking, Chief Credit Officer of Cresco Bank & Trust Company and School Board Member, added, “As Chair of the Cadet Capital Campaign, I feel it’s important that we are transparent with the communities in our District as to why we are doing a fund-raising campaign.
“The building project itself is going to cost about $2 million more than originally planned due to rising costs over the past few years, and several equipment purchases/improvements were not included in the original project scope. Therefore we felt that a campaign would help give the District more financial stability and flexibility, along with providing the opportunity to take on additional projects in the more near future.”
Mike Drees, President of CUSB Bank commented, “CUSB Bank is proud to donate $150,000 towards the Howard-Winneshiek CSD construction project.  We know this project will enhance the safety of the students in the district while it also gives them updated facilities to contribute to a quality education and their overall success. We hope that other businesses and members of the community will consider giving to this worthwhile project.”
Donna Thomas, Market President of Cresco Bank & Trust, agreed, “As a life-long resident of the community, I along with my large family, have benefited from Howard-Winn. It is now important for us to support this capital campaign for the future generations.  If we all do our part, the next generation will also benefit from safe and modern facilities.”
The committee will be giving brochures out at school events, and posters will be placed throughout the school district. Check them out in the lobby of the High School, Elementary/Junior High, Early Childhood Development Center, District Office, NICC Center, Chamber, Cresco CUSB, Lime Springs CUSB, Ridgeway CUSB, Cresco Bank & Trust, Peoples Bank in Elma and the gas station in Chester.
The information is also posted on the school website at https://www.howard-winn. k12.ia.us.
Members of the Cadet Capital Campaign Committee are Andy Ludeking, Chair, Missy Hvitved, Amanda Keller, Carol Korsmo, Erin Ludwig, Kelly Moellers, Sally Peter, Shirley Sovereign, Kyle Teeling, Larry Trende, Scott Wiley, Robyn Lane and Einck.
Individuals can reach out to these members with questions or donations.