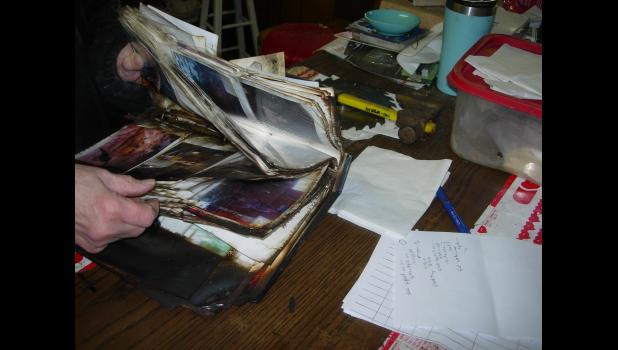 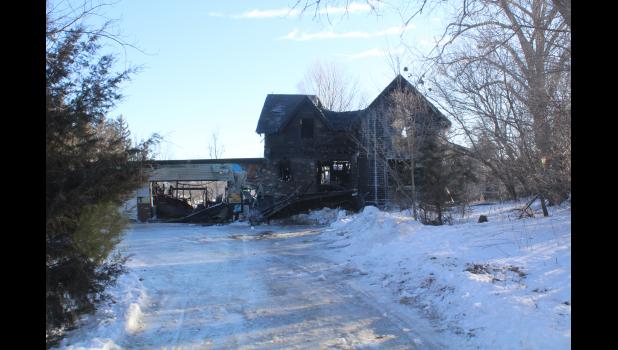 —Another 1-2 minutes, Mike Grube would not be here to tell the story
By:
Marcie Klomp ~ News Editor tpdeditor@crescotimes.com
CRESCO - The Cresco Community Fire Department was paged to a residential structure at 12442 Old New Oregon Road in rural Cresco at 10:50 p.m. on Wednesday, Feb. 5.
According to Fire Chief Neal Stapelkamp, the home owner, Mike Grube, was asleep on the first floor when he was awakened by heat and smoke detectors.  He and his pet dog were able to escape the extreme fire and smoke conditions and called 911 for assistance.
Grube experienced singed facial hair as well as some smoke inhalation but refused medical treatment following his fire.
Based on information received with the page, Cresco Fire requested additional water tanker support from the Protivin Fire Department.  When arriving on scene, Cresco Fire encountered extreme fire conditions throughout the home with very heavy fire extending through several windows and doors.
With these conditions, Cresco Fire initiated a defensive fire attack from the exterior of the home with several hose lines.
Mutual aid was requested from the Ridgeway Fire Department for additional tankers.  The water supply was established via tanker shuttle from Cresco.
Cresco’s Second Assistant Chief Wayne Kerian estimated 60 firefighters helped with the blaze.
The Cresco Fire Department remained on the scene until shortly after 5 a.m. on Thursday morning.
For several hours after that, Cresco firefighters stood watch over the home to make sure nothing was taken.
The rural home and contents are considered a total loss.  There were no injuries to emergency personnel on scene, and the cause of the fire remained under investigation.
Stapelkamp stated, “Mr. Grube was very fortunate to escape his home with his life, and this is a very good example that working smoke and heat alarms save lives.”
It was later determined the blaze was an electrical fire.
In addition to the Protivin and Ridgeway Fire Departments, Cresco Police Department, Regional Health Ambulance, Howard County Sheriff Deputy, MiEnergy and Cresco Fire Dispatch assisted as well.
Grube’s friend Jeff Wilson stated, “This man would help anyone in need without question. He is a very hard worker and has done a lot in our community. Now he needs our help.”
Currently, Grube is living with his parents, John and Betty Grube of Cresco.
Betty said, “We are very lucky to have him. One or two minutes longer, and he wouldn’t be here.”
Mike was woken by a heat detector. “It is one that I bought 20 years ago at the [Tower Club]. They had a free meal and gave a presentation on this. I put it up and probably never even dusted it in 20 years.”
He had smoke detectors as well, but the fire was so loud they did not wake him up. The heat detector sounds like a fire bell. It has a fuse on it that sounds the bell when the temperature hits 120 degrees. Grubes plan on selling them in the near future at their business, Grube Lawn & Garden in Cresco.
When Mike awoke, he tried to get to the basement to find a hose to put out the fire. There was fire on the wall. He went to the west door to get out and a window broke and a fire ball came at him.
He and his dog, Duncan, raced to another door, and the fireball chased them out. He got one vehicle out of the garage.
“I don’t remember how I got my glasses or my phone. My pants were right there, and I didn’t put them on. I couldn’t remember my address when I called 9-1-1.”
Mike and Duncan became separated. He waited around until the emergency personnel arrived. He drove to his parents house. Duncan swam across the river and went to their home as well.
Betty said when he got to their home, he was wearing his pajama pants and a shirt. “No socks. No shoes.”
There are lots of miracles that happened that night, least of which was Mike being able to call 9-1-1. His dad, John, said, “I don’t know how he had his phone. He loses it all the time.”
Betty noted, “One of the first things Mike was distraught about losing was his Bible. On top of the very first box donated to him was a Bible. That’s when I lost it. God works in mysterious ways.”
Mike and his family went back to what was left of his home. He was able to find his class ring and the ring he received for bowling a 300 game.
A storage locker was rented to hold items friends and neighbors started donating. Some of the most appreciated items were the small ones . . . toothbrush and toothpaste, shoes, dog food for Duncan.
“I’ve had a lot of support from family and locals. Even my renters have given me money they probably can’t afford.
“I want to thank everyone for everything they have done and donated. The firefighters have a dangerous job, but they were there for me.”
Mike joked that he is right back where he started. “I’ve been gone from home for 40 years and now I’m back there.”
Betty said, “It’s nice to see the support we have. We are so thankful to live in a small community. People have been great. You don’t count your blessings enough.”
Mike was in awe, “I’m alive because a $200 piece of equipment saved a man’s life. All you lose is pretty small when you are talking about a life.”
A GoFundMe page has been started. Go to gofundme.com; click search; type “Mike Grubes Fire Relief.”