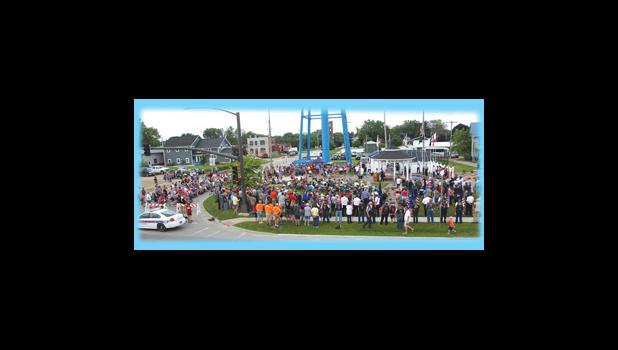 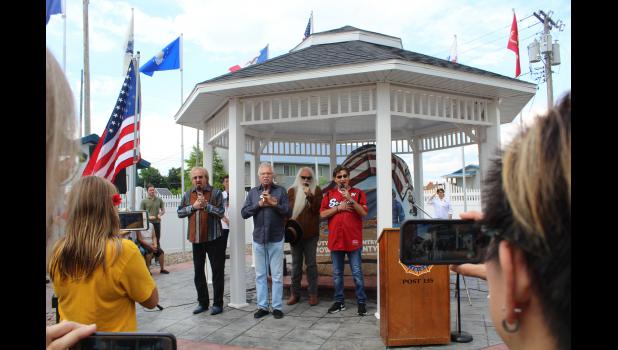 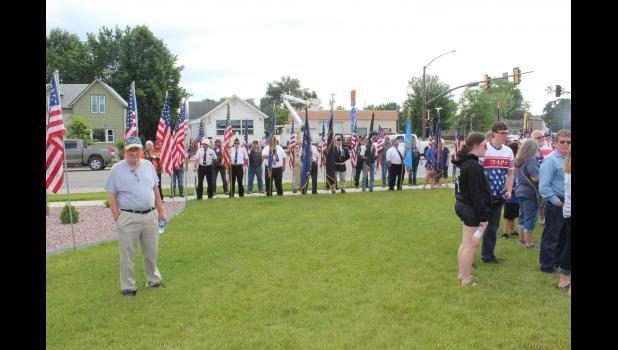 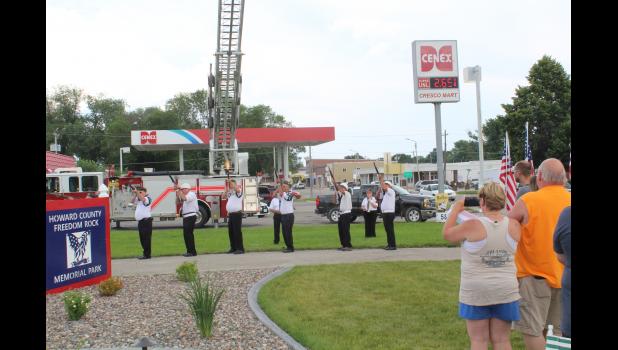 By:
Marcie Klomp News Editor tpdeditor@crescotimes.com
CRESCO -“Let this display forever serve to remind us of our obligation to defend the inheritance these heroes have bestowed us and inspire all of us to be worthy of their sacrifice,” said Marshall Rogne at the Howard County Freedom Rock Memorial Park dedication on June 23.
The Howard County Veterans Affairs Director, gave the welcome to a crowd of over 500 who attended the event.
Skip Grinhaug, Chaplain of American Legion Post 135, gave the opening prayer. He asked for God’s blessing over America, its president, all public servants and upon the flag. “We ask thy blessing upon all who have served and for those who are currently serving in the military branches of the United States of America.”
He continued, “May this Freedom Rock serve for the good of the many. In service to the living, may it be a memorial to the dead.”
After explaining the pole for the American flag at the park was donated by VFW Post 4561 Auxiliary 65 years ago, Rick Slifka, Commander of VFW Post 4561, led the group in the Pledge of Allegiance.
Jim Perry, Commander of American Legion Post 135 and chairman of the HCFRMP Committee, gave a short history of the project, which was first mentioned in 2014. Within four years and 600 hours of committee involvement, the dedication was held.
“It is with great pride we dedicate the Howard County Freedom Rock Memorial Park to honor our men and women who sacrificed so much for our country and to those who continue to serve so we might live in peace today,” Perry said.
Ray “Bubba” Sorensen, Freedom Rock Tour artist, told the crowd he was inspired after watching the movie “Saving Private Ryan,” in 1999. He painted his first rock the next Memorial Day near his hometown of Fontanelle, Iowa.
“I am able to get 10-16 Freedom Rocks done each year. Each one is a piece of a 99-piece puzzle. If you don’t see your branch, gender, era, race, take the 99-county tour and visit Iowa.” He concluded, “God Bless America.”
Chris Reicks of Reicks Landscapes noted, “There couldn’t be a better spot for this. Thanks to everyone for allowing me to be part of this project.”
Major sponsors of the project were recognized, and Donna Thomas of Cresco Bank & Trust and Scott Thomson of CUSB Bank gave short speeches. Jane Bloomingdale of House District 51 said she was honored to be part of the celebration. “Thank you to our veterans. Bubba, thank you for your vision.”
Cindy Yslas, American Legion Post 135, named who sponsored each pole as that branch of the military’s flag was raised.
Spiff Slifka of Howard County Business & Tourism was surprised by having to say a few words about the project on which she helped. She joked she learned about veterans during the three-and-a-half years of meetings. “I found that if it was a 6 p.m. meeting, they would arrive at 4:30!”
Mark Grinhaug of American Legion Post 135 and VFW Post 4561 was in charge of the gun salute, and Alice Abbott of Legion Auxiliary Post 135, played “Taps.”
The closing prayer was given by Chaplain of VFW Post 4561 Nate Thorson. “We honor those sons and daughters of America who answered the call to duty in our times of need . . . those who left home and love for distant shores and battles . . . those who did not shrink from duty . . . those who gave of their youth . . . and the many who paid the ultimate price for our freedom.”
Many members of the crowd stayed around after the dedication to wait for the Oak Ridge Boys to perform the National Anthem, which they did around 5 p.m. The Country Music Hall of Fame group later played in the grandstand of the Mighty Howard County Fair.