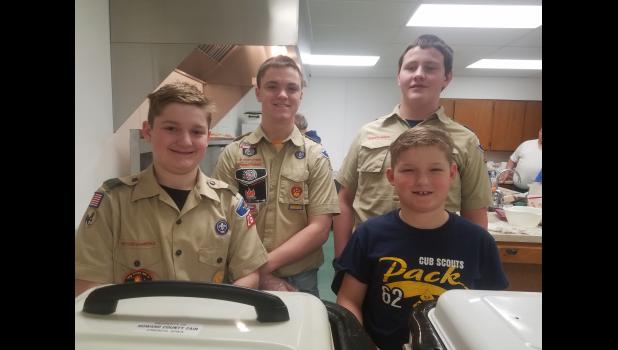 By:
Kim Hudecek TPD Staff
Howard County - Well there was literally no snow for the Driftrunners’ 47th Annual Snowfest but that didn’t stop enthusiasts from enjoying many of the weekend’s activities.
“There’s bare ground,” said James Kitchen. “No snow, it kind of sucks.”
But for others, well, there was a lot of fun to be had.
“The 50/50 fun run started Friday night and about 30 or so people went by car,” said Bob Martinek, Club Treasurer. “It’s really important for some of our area business owners to have snow, snowmobilers and the business that comes in with the riders. We couldn’t ride, but we will be there. If we have a good year it can really make a difference with their bottom line. Some really do depend on weekends with good snow.”
Friday, quickly turned to Saturday morning and with that came the traditional Boy Scouts Troop 261’s breakfast, served at the Fairgrounds Expo Center.
Troop leader, Mike Conlon, Scouts and parents rallied together and served a piping hot breakfast.
of pancakes, scrambled eggs, sausage links and a drink of choice, coffee, juice and milk, that is. Even without the snow, locals and visitors came out to support the troop as they raised money for Spina Bifida.
Leonard and Angie Kappes were two of the people who came out. “I just come to have breakfast,” said Leonard. “There about five places putting together breakfasts this weekend, and we decided to support this one.”
Ready smiles were also served up by Scouts, Robbie Ollendieck, Reece Ollendieck, Harry Kitchen, Josh Jensen, Sam Brace, Luke Ishman and Brayden Ishman.
“If there is anything else after what we put toward Spina Bifida, it will go to the boys to use for summer camp,” shared Conlon.
And what about Driftrunners?
“We’ve gotten a few new memberships over the weekend,” said Martinek. “Some of the people who pay their membership dues don’t even have sleds but they like to support us regardless.”
Gordon Norton of Decorah explained his reason for membership.
“To be honest with you, this is the best club I’ve ever been in,” said Norton. “It is an organization and it runs like an organization. It’s not run by a bunch of people who would rather focus on drinking activities and then have a meeting. This club takes care of business first and focuses on the good times next. They will be there. This club is by far better than any other club I have been in. That’s why I am here today to get my renewal. I love to talk snowmobiling even if I can’t ride anymore.”
Being a member of this club isn’t the only way to be a winner. One of the raffle winners was Jennifer Schumacher. She won the Traeger grill. Jim Harrington won the mongo 50” television and Shelly Marshall won the smaller, 40” inch version. The Fareway meat bundle went to Mark Darling. Harvest Farms Cabin Stay went to James Gragert and the GoPro winner was Justin Leuenberger. There were many other prizes donated by local businesses and individuals so this is just a sampling of the weekends winners.
And although participation was down for the 50/50 run, people still came to play and gave business to those stops on the run. Winners were Cory Ferrie, first; Wayne Vokaty, second; and Tary Kolek, third.
“The weekend went over better than we first thought,” said Brandon Plaht, Driftrunners Club Vice-President. “Friday and Saturday event rides had a good amount of people as usual. People stopped at the Expo throughout the day to buy raffle prize tickets and check out the silent auction items. The concert had more attendance than we expected, and everyone had a good time. Given the fact we didn’t have snow and the trails were closed, people still came out to support us. And the last stop for food, brunch at Dam Bar & Grill, they were busy just trying to keep up with the crowds all morning.”
No snow for Snowfest, but still plenty to do and lots of fun was had. One can never predict the weather and Mother Nature can influence a lot with this Club and community event. Next year everyone will be praying for snow!