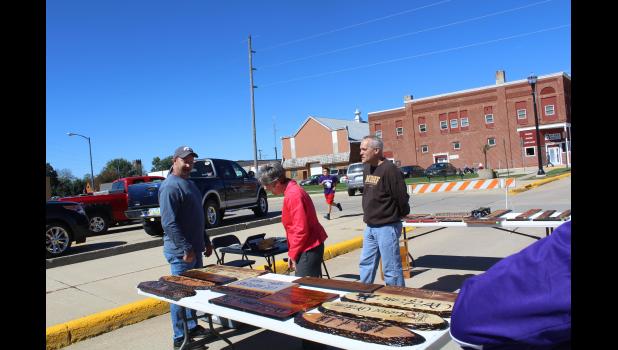 By:
Marcie Klomp News Editor tpdeditor@crescotimes.com
Cresco - During her 99-County Tour, Sen. Joni Ernst visited with some small business owners, including some who were vendors at the craft show for Norman Borlaug Harvest Fest on Sept. 22.
In addition, she made a stop in the harvest tent during the quilt auction. She told the crowd she was pleased to spend time with District 51 Representative Jane Bloomingdale and her family, along with members of Borlaug’s family (his daughter Jeanie Laube and her grandson, Luke Larson, both of Dallas, Texas).
Her first stop, though, was at the Chamber office, where she was reminded of some of Borlaug’s accomplishments and was able to hold his Nobel Peace Prize (with gloves).
“This is the first time I’ve ever seen, let alone held a Nobel Peace Prize. Dr. Borlaug was such a remarkable man, and I’m proud to call him an Iowan. It’s been a great pleasure to be here.”
Ernst was the first woman elected to the United States Senate from Iowa and is the first female combat veteran elected to the United States Senate from any state.