Skip to main content
Home / News / Crestwood students recognized by Board of Ed. 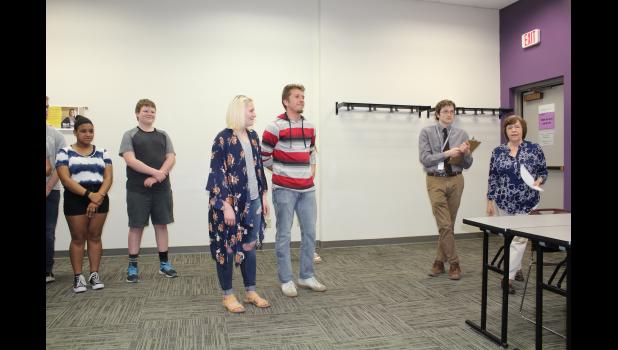 Crestwood students recognized by Board of Ed.

By:
Marcie Klomp News Editor tpdeditor@crescotimes.com
CRESCO - It’s getting to be a broken record at the Howard-Winneshiek School Board meetings but in a good way. For the past several months, students have been recognized for their athletic and scholastic accomplishments.
At the most recent board meeting on May 14, yearbook students gave a presentation on their new online and print publication “Salute,” and speech students were recognized for their success at recent contests.
• Libby Schwade is the yearbook advisor, with Kirsten Gossman. Her students explained the process they went through to get a finished product. They are partnering with the Cresco Shopper. They have done three issues of the “Salute” this year and plan to do one each month, October-June in the 2018-19 school year.
• Aaron Kvale and Karen LeFebvre, speech co-advisors, reported on Individual and Large Group Speech. LeFebvre mentioned there were 34 students in 12 teams in the Jan. 20 Large Group competition. Four of six teams received Division I ratings.
For Individual, 20 students had 31 entries with 13 advancing. Eleven of those received Division I ratings.
Raymond Himli and Rielynn Thompson performed at the IHSSA Individual All-State Festival. Thompson was nominated in both of her events — Storytelling and Prose. Himli was nominated in Improvisation. From the letter the co-advisors received notifying them of the nomination: To have been selected out of nearly 9,000 who started competition at the District level is a unique honor. Four hundred sixty-four students have been selected as Outstanding Performers.”  There were only 50 double nominees and Thompson was one of them!
The advisors plan to have summer day camps for the Large Group students.
In conclusion, Himli gave an improv performance about the last day of school, mimicking the principal (Chris Rogne) and superintendent (Ted Ihns).
• Mr. Ihns then gave his report, mentioning the last day of school is May 25 with a dismissal of 1 p.m. In addition, on May 4, the Iowa High School Musical Association Large Group Festival was held in Decorah with Treble Choir earning a 2 rating, Concert Chorale Choir earning a 1 rating and Concert Band earning a 1 rating.
“We are fortunate to send 14 student athletes to State Track in Des Moines,” he said. Also, boys and girls golf tournaments were taking place, and the baseball and softball programs were underway.
• Terese Jurgensen, Director of Special Education, told the Board, “In January, I came to the board about special education and how it is going and how $500,000 is going out of the district. Since then, two plus another are coming back from Crossroads in Decorah.
“Parents are so thankful for what we’re doing. You can just do enough. What we’re doing is a cut above.” She commended her teachers many times throughout her presentation but acknowledged another teacher is needed to serve the students.
The board approved the addition of a 1.0 FTE special education teacher.
• Several school policies were approved for first and second readings.
• The tentative agreement with H-W Education Association was passed, as well as the agreement with the Bus Drivers’ Union.
• The teacher and clerical handbooks were approved.
• There are 94 graduates from the Class of 2018.
• New cabinets were approved to purchase for two kindergarten classrooms in the K-8 building because of wear-and-tear and the Ag classroom, the cabinets of which are original to the high school. The total price was $29,090 from Casework Cabinets. Building and Grounds will install the cabinets.
• Carpeting from Billmyer Furniture will be replaced in five classrooms in the K-8 building for a total of $14,732.40. Building and Grounds will remove the existing carpet.
• Scholbrock Masonry was approved to repair sidewalks, for a total of $12,225. They include sidewalks to the north parking lot walls, west property walkway, high school athletic entrance, K-8 north, K-8 band room entrance and the K-8 main entrance.
• Billing services for medicaid were changed from Leader Services to Timberline Billing Services.
Mr. Ihns presented all the board members with awards, thanking them for their service to the district and community. They include President Duane Boder-mann, Vice-President Toni Johnson and members Casey Vobr, Alison Holten and Todd Hill.