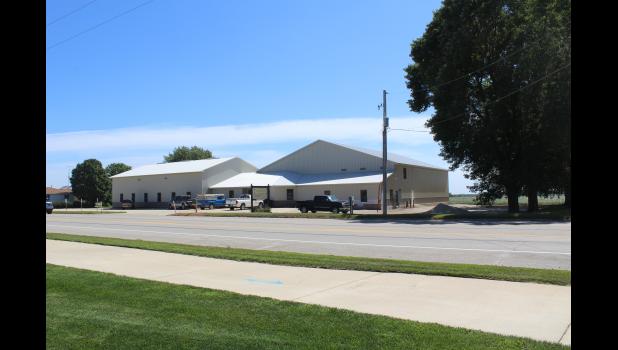 By:
Marcie Klomp ~ News Editor tpdeditor@crescotimes.com
CRESCO - After being without a permanent home for a little over four months, parishioners of Cresco Community Chapel are happy to be moved into their new quarters, an addition to their main structure.
Sunday, Aug. 25 was the first Sunday worship since mid-April when the old addition was demolished. Construction then began intensely in mid-May.
Pastor Mike Simiele noted there were several reasons for the new multi-purpose addition — mostly in relation to space. The congregation has been growing since Simiele became pastor 26 years ago, from around 55 to well over 100.
The multi-purpose building is housing a new kitchen, Sunday School rooms, updated restrooms, a pastor and youth pastor offices, and the Aletheia youth now have their own identity in their own room. The new fellowship hall allows for seating for well over 200, which is needed for weddings and funerals.
“We are looking to the future,” said Simiele. “The new part is one floor and handicapped accessible, but we do have an elevator for people to go to the upstairs rooms. It will also be more user-friendly.”
Much of the multi-purpose area will be used for outreach. This includes the AWANA Circle (for K-6) and Aletheia Student Ministries (for teens in grades 7-12). It will also feature basketball hoops and a volleyball court.
This is the second major expansion of the non-denominational church. The congregation moved into the original building 50 years ago on June 16, 1969. In June 2002, construction began on the first remodel of the chapel area. Seventeen years later, the newest addition is being celebrated. As with the first expansion, by God’s grace, the congregation is committed to construct the addition debt-free.
“We are thankful to the Howard County Fair Board for letting us use the Featherlite Center during the construction phase,” said Simiele. “This building is not made for man but for the glory of God.” [I Cor. 10:31]
Look for an upcoming announcement of an open house.