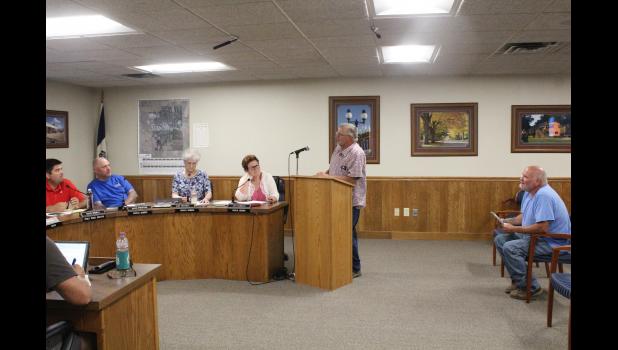 By:
Marcie Klomp ~ News Editor tpdeditor@crescotimes.com
CRESCO - City Clerk Michelle Elton stated Mediacom informed the City that four packages will have their rates raised by 25%. She added she would be giving department heads the Capital Improvement Plan to make updates to it in October.
• In other business from the Aug. 1 Cresco City Council meeting. Shimek Sanitation Service of Spillville was in attendance to ask if they could pick up commercial garbage in the city limits. “We have had 8-9 people call about picking up their garbage. They’re pretty mad. Their rates have gone up 400-600%,” said Stan Shimek.
City Clerk Michelle Elton said, “We used to do the billing. The last month we billed was May. The latest bill came from Hawkeye.”
Council person Amy Bouska noted for commercial garbage, the contract with Hawkeye is not exclusive.
It was mentioned Decorah has four separate contractors.
Elton noted she didn’t want to allow too many contractors into the city — especially for residential. “The City bills for all residential and light commercial. We bill if they get water. If there were more vendors we wouldn’t have control.”
Bouska stated the county is required by a 28E agreement to take garbage to Winneshiek County. When asked, Shimek said the cost in Decorah is $72 per ton. The Floyd/Mitchell/ Chickasaw dump at Elma is $41 per ton.
Council agreed to draft an agreement allowing other commercial garbage haulers to contract directly with commercial businesses if they have dumpsters.
• Public Works Director Nate Widell said chip sealing by the Street Department was concluding. “We only got two loads this year because of the cost of oil.”
He explained S&M Underground was in town to install conduit for Harmony Telephone Company. The company received a grant to install fiber for internet service.
• Police Chief Tim Ruroden reminded council for June, there were 60 animal calls, 25 medical assist calls and 19 arrests and charges.
“Two officers are going to the academy. One is testing for the nine-week academy and the other for the 16-week one.”
Later  in the meeting, Council approved a resolution for a police retention bonus program. Officers will be given a $5,000 bonus for staying in the employment of the City after five years. It was noted the bonus was in appreciation for the work the police officers perform and the difficulty it is to recruit and retain qualified officers.
• Council person Gary Kriener reported he had helped Scott from WHKS inspect basements in the downtown area to see what issues were addressed in 1983, when North Elm St. was repaved and a new watermain was installed. He was happy that things still looked good.
• A street closing permit was approved for Atomic Pizza for Harvest Fest and its five-year anniversary. On Aug. 27, 2nd Ave. W. from North Elm to the alley behind Leuthold’s will be closed for live music and a beer garden.
Another permit was approved for The Pub on Aug. 27 from half of alley from North Elm between 112 and 114, going west. There will be an expanded patio and beer garden.
• Council approved the Outstanding Obligation Report.
• Council received a profit and loss report on the special events taking place at the Cresco Theatre.
• There will be a Public Hearing on Aug. 15 to amend city ordinances pertaining to sewer service charges.
• The $750 building permit fee for the addition at Howard-Winneshiek CSD was waived.