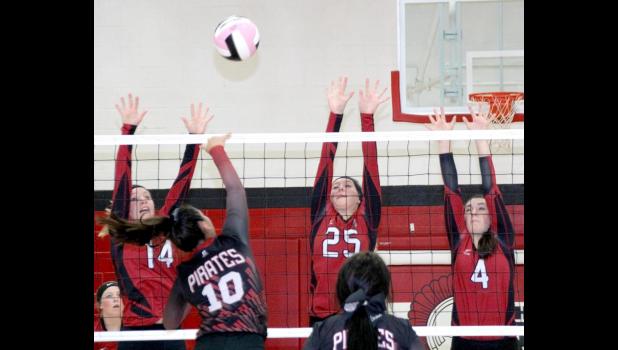 By:
Nate Troy
JACKSON JUNCTION -  A strong team effort lifted the Turkey Valley volleyball squad to an impressive 3-0 homecoming win over Postville on Sept. 28. The Trojans won by scores of 25-20, 25-13, and 25-12 to improve their record to 4-14 overall.
“This was a crazy week,” TV Coach Ethan Adams said. “We had the coronation and crowning at our game, which was very exciting, and I am very proud of the girls' focus on and off the court.
“We knew if we didn’t play well, we could have a fight on our hands. It was important to play cleanly. The girls did just that and it turned out well for us. The freshmen and the JV teams got us started out great (by winning their matches), and we kept the ball rolling,” Adams said.
Breanna Busta paced the Trojans from the service line as she completed 23 of 26 serves, had eight aces, eight digs and four kills. Kim Fischer tallied 11 digs. Katlyn Baumler had four kills and one block.
Ashton Kout recorded three kills, 16 assists, had four digs and completed 18 of 19 serves with four aces. Kassidy Reicks had four kills, eight assists and four digs. Karissa Schmidt had seven kills, three digs, completed 12 of 14 serves and had two aces.
Lydia Schuchhardt had eight digs and three kills. Elli Winter tallied two kills. Jordan Lukes had one kill. Jenna Schmitt was three of four serving.
As a team, Turkey Valley recorded 28 kills, 26 assists, 39 digs, completed 63 of 73 serves and had 15 aces.