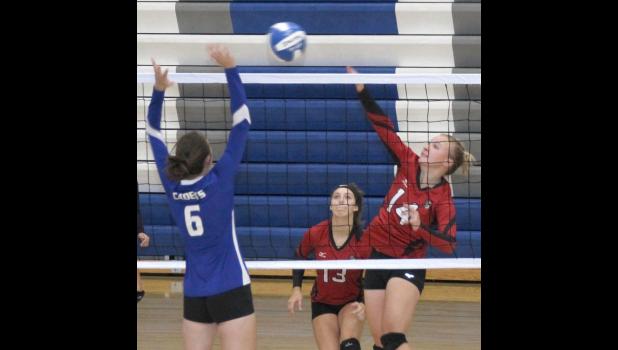 By:
Nate Troy
CALMAR - The Turkey Valley volleyball team competed hard on Thursday, Sept. 14 against South Winn before losing to the Warriors in three games (13-25, 19-25, 24-26).
“The girls dropped a very hard-fought three-game loss,” TV Coach Ethan Adams said. “We kept improving as the night went on. They found themselves, their heart and attitude, that is, a little bit on that court last night.
“They showed us fight and aggression. They took risks and it started to pay off. We were very much in the driver’s seat in the third set, and credit to South Winn for fighting back for the sweep. We can do a better job of staying in control and closing sets. We were scrappy, but this team needs to continue to clean our play and control what we can control,” Adams said.
Karissa Schmidt was 14 of 15 serving, had three aces, and nine digs for TV. Lydia Schuchhardt had 10 digs and two kills. Kim Fischer recorded 12 digs and completed nine of 11 serves with one ace.
Kassidy Reicks had six assists, five digs, three kills and completed seven of seven serves. Ashton Kout had four assists, two digs and completed seven of seven serves. Breanna Busta had five digs and three kills. Jordan Lukes and Elli Winter each had two kills.
Waukon Tourney
Playing at the Waukon Tournament Saturday, Sept. 16, the Trojans won two of three games in pool play before losing to Lansing Kee in the Gold Bracket Final Round.
In pool play, Turkey Valley lost to Crestwood (14-21, 7-21); the Trojans beat Hope Lutheran (21-8, 21-19); and TV beat Postville (21-19, 21-16). In the Gold Bracket Final Round, Lansing Kee downed Turkey Valley, 21-14, 21-19.
“We played fairly well and got our first wins, which was a nice thing to have out of the way,” Coach Adams said. “We still played a little inconsistently and it showed against Cresco. We are still growing and a couple girls had some breakout performances towards the end of the day.
“Lydia Schuchhardt showed some real hustle and got some key balls up. Towards the end of the day, Karissa Schmidt tallied a good amount of kills for us. We need those hitters to do that because our setters Ashton Kout and Kassidy Reicks have been very consistent for us.”
H. Lutheran match
Breanna Busta completed 11 of 11 serves, had three aces and five digs for the Trojans. Kassidy Reicks and Karissa Schmidt each had three kills. Ashton Kout tallied four assists and six digs.
Crestwood match
Kassidy Reicks had four kills. Ashton Kout completed five of five serves and had five assists. Kim Fischer tallied five digs.
Kee match
Busta completed 10 of 10 serves and had two aces. Kout was nine of 10 serving, had two aces and six digs. Karissa Schmidt had four kills. Kassidy Reicks had five digs.
Postville match
Kout was 15 of 16 serving, had three aces and three digs. Karissa Schmidt had seven kills. Kassidy Reicks was 11 of 11 serving, had four aces and five digs. Kim Fischer had 10 digs. Lydia Schuchhardt had six digs.
Kepros statistics
The Turkey Valley volleyball team competed at the Kepros Invitational in Cresco on Sept. 9. The Trojans lost matches to Clayton Ridge, Lansing Kee, Waterloo West, North Fayette Valley, Crestwood and Waukon.
Waterloo West match
Kassidy Reicks had three kills, two digs and completed four of four serves. Kim Fischer had five digs. Karissa Schmidt and Lydia Schuchhardt each had three digs. Ashton Kout had two assists.
Lansing Kee match
Kassidy Reicks completed five of six serves, had three digs and three kills. Ashton Kout had four assists and completed four of four serves with one ace. Katlyn Baumler and Lydia Schuchhardt each had two kills. Kim Fischer completed three of three serve attempts.