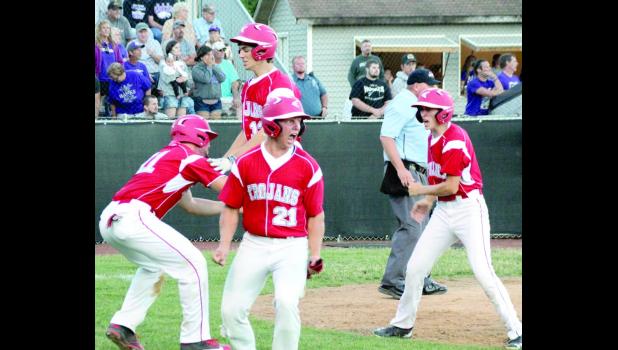 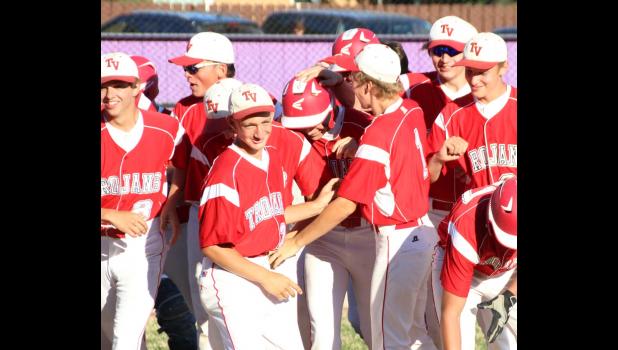 By:
Nate Troy
NEW ALBIN - Strong pitching by Evan Busta and solid team hitting lifted the Turkey Valley baseball team to a 4-1 win over Tripoli in the first round of the Class 1A District 5 Tournament on July 11.
Squaring off against a stout Lansing Kee team in the district semifinals on July 13, the Trojans were unable to hold off a late Kee Hawk rally as Kee edged Turkey Valley, 9-8, to end the TV’s season at 11-19.
TV 4, Tripoli 1
Trojan pitcher Evan Busta held Tripoli to only three hits over six innings as Turkey Valley downed Tripoli, 4-1, in the first round of the district tournament.
“We played a very clean game,” TV Coach Dan Stepan said. “We were able to execute when we needed to.”
The Trojans plated single runs in the second, third and fourth innings to take a 3-0 lead. Tripoli scored one in the top of the sixth before Turkey Valley answered with one run in the bottom of the sixth.
Evan Drilling tallied two hits, including one double, one run and one run batted in for the Trojans. Cody Hackman had one double. Mason Goerend and Simon Schmitt each had one hit and one run. Evan Busta and Jordon Snyder each had one hit. Kyle Langreck scored one run.
Evan Busta was the winning pitcher. He went six innings, allowed three hits, one earned run, three walks and struck out nine. Cale Reicks tossed one inning and struck out one batter.
Score by innings
Tripoli  0 0 0 0 0 1 0 - 1
TV        0 1 1 1 0 1 x - 4
Kee 9, TV 8
An exciting back-and-forth contest ended in Lansing Kee’s favor as the Kee Hawks rallied for five runs in the sixth to nip the Trojans, 9-8, in the district semifinal on July 13.
“What a ballgame!” Coach Stepan said. “Both teams scored 15 runs with two outs. That's an incredible stat. Neither team lost the game (with poor plays or anything like that). Both teams played well enough to win.
“Games like that are why kids play, why fans pay, and why coaches coach. The seniors were great leaders all year and kept the summer fun. Seven seniors with seven different personalities made it fun to coach and be around these kids,” Stepan said.
The game started great for the Trojans as Evan Drilling led off the game with a solo home run to left. Two innings later, TV’s Cale Reicks ripped a double to score Drilling to give the Trojans a 2-0 lead in the third inning.
Trojan pitcher Cale Reicks held the Kee Hawks scoreless until Kee erupted for four runs in the fifth. With two outs, the Kee Hawks tallied three straight singles to bring in one run. A ground rule double by Josh Walleser tied the game at two. Brock Flack singled to drive in two runs to give Kee a 4-2 lead.
In the top of the sixth, it was Turkey Valley’s turn to rally with two outs. With the bases loaded, Jaden Bruess ripped a double to left to drive in three runs. After Jordon Snyder walked, Evan Drilling doubled to drive in two runs. Cale Reicks followed with a single to score one run and give TV an 8-4 lead.
In the bottom of the sixth, Kee answered with five runs to go ahead, 9-8. With the bases loaded, Clay Olson walked to score one run. Josh Walleser doubled to drive in three runs. After Drilling came into pitch for TV, Flack hit a bloop single to drive in Walleser.
In the top of the seventh, Simon Schmitt reached on a fielder’s choice before Kee secured the win.
Evan Drilling had a great game at the plate with one home run, two doubles, three runs and had three RBI. Jaden Bruess posted one double, one run and three RBI. Cale Reicks had two doubles, one single and two RBI.
Wyatt Blazek and Jordon Snyder each had one single and one run. Evan Busta scored one run.
Cale Reicks was the losing pitcher. He went five and two-thirds innings, allowed nine hits, eight earned runs, five walks and he struck out seven. Evan Drilling pitched one-third of an inning, allowed two walks and struck out one.
Score by innings
TV   1 0 1 0 0 6 0 - 8
Kee  0 0 0 0 4 5 x - 9