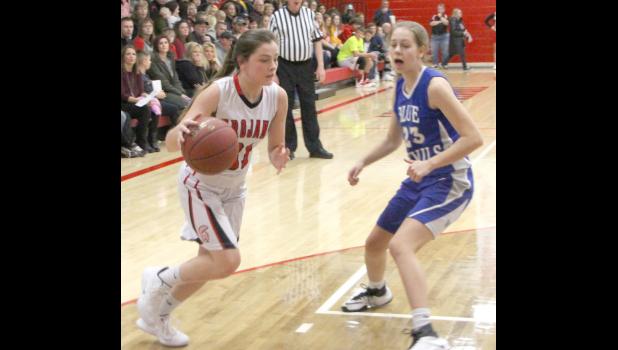 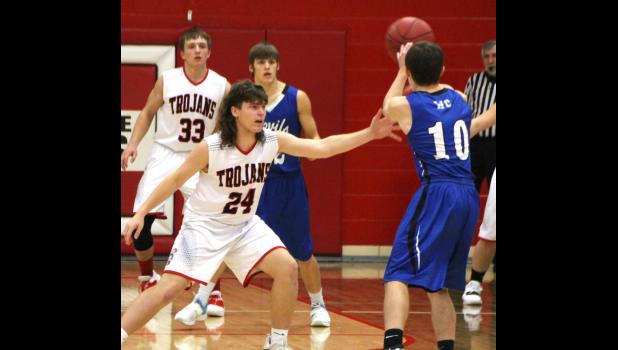 By:
Nate Troy Sports Editor
JACKSON JUNCTION - The Turkey Valley girls’ and boys’ teams both turned in solid performances at home on Nov. 30 against West Central. The TV girls’ team routed the Blue Devils, 57-15; and the Trojans boys’ squad crushed West Central, 72-39.
Girls: TV 57, WC 15
The Trojans girls’ team raced to an 18-4 first period lead and never looked back on its way to a 57-15 victory.
“This was another intense effort from our girls,” TV Coach Carla Nymeyer said. “We built an early lead and kept a steady run to give all players some court time.
“We had strong attacks to the basket, which put us at the line where we knocked down a respectable 14 of 20.  Junior starters Katlyn Baumler finished strong inside and Jordan Lukes took care of business on the outside with a trio of treys.  Jaycie Byrne and Kara Reicks also did a great job of attacking the basket,” Nymeyer said.
Katlyn Baumler finished with 15 points. Kara Reicks tallied 11 points, and Jaycie Byrne added 10 points.
Jordan Lukes had nine points on three three-pointers. Lindsey Jackson had six points. Breanna Busta chipped in three points, and Josie Weber had two points.
Score by quarters
WC  4    5   4   2 - 15
TV 18  20  10  9 - 57
Boys: TV 72, WC 39
The TV boys’ squad built a commanding 42-19 halftime lead and sailed to a 72-39 triumph over West Central.
“Tonight the boys came out and played with a lot of energy,” TV Coach Chris Sullivan said. “They were flying around, getting deflections and coming up with steals which initiated our offense. We thought we did a great job of contesting shots and not giving them second chance opportunities.
“Our kids had 15 steals and created 25 plus turnovers, and that is a recipe for victory. On the offensive end, the guys got the ball to the middle and good things happened from this. This is the way we will need to play moving forward and what we expect from this group.
“Ethan Leibold had a nice game for us on the offensive end with 17 points in limited minutes, and Garrett Kurtenbach had a double-double off the bench with 13 points and 10 rebounds. Seth Huinker also had a nice night shooting and chipped in nine points off the bench. Simon Schmitt did a great job finding the open spots around the basket and finishing. We will need to bring the same energy (during upcoming games),” Sullivan said.
Ethan Leibold finished with 17 points, four rebounds and three steals. Garrett Kurtenbach had 13 points, including one three-pointer, 10 rebounds and three steals. Seth Huinker had nine points on three three-pointers and two rebounds.
Simon Schmitt had nine points, four rebounds, two assists and two steals. Eli Nymeyer tallied eight points, including one three-pointer, had four assists and three rebounds. Eli Reicks had eight points, including one three-pointer, three rebounds and two steals.
Jason Herold had three points and three rebounds. Kalvin Langreck and Kade Kruse each had two points. Kannon Leuenberger had three assists and two rebounds. Dalton Rush had two steals.
Score by quarters
WC   8   11   8   12 - 39
TV  22   20  17  13 - 72
Girls: WV 57, TV 51
FAYETTE - Taking on Wapsie Valley on Dec. 1 at Upper Iowa University, the Turkey Valley girls’ team battled hard before losing, 51-57. The loss dropped TV’s overall record to 2-2.
TV led 13-12 after one period before Wapsie Valley went on a 19-7 second quarter run to take a 31-20 halftime lead.
“We didn’t step up to the challenge tonight,” TV Coach Carla Nymeyer said. “Wapsie’s scoring trio was solid and we had trouble handling their bigs (tall players). We had lapses on defense that caused us to get down in the second quarter.
“Our intensity wasn’t there until the four-minute mark in the game when we made a nice run to cut the lead and keep the game in reach. But Wapsie connected on free throws to seal the win. We will take that end of game momentum into practice,” Nymeyer said.
Jaycie Byrne tallied 14 points, including two three-pointers, to lead the Trojans. Breanna Busta and Jordan Lukes each scored 11 points. Lukes had three three-pointers.
Katlyn Baumler had 10 points. Kara Reicks scored four points, and Savanna Schmitt had one point.