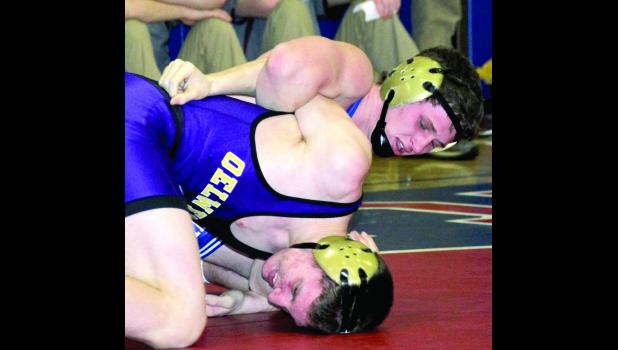 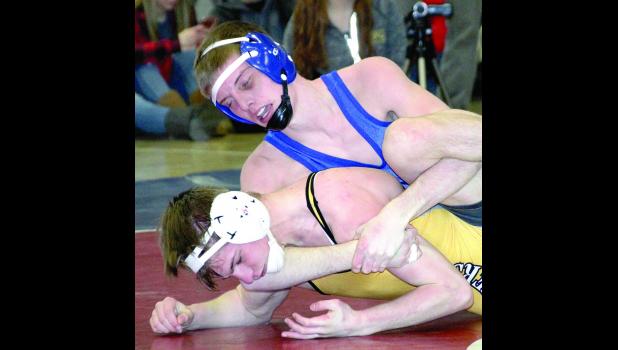 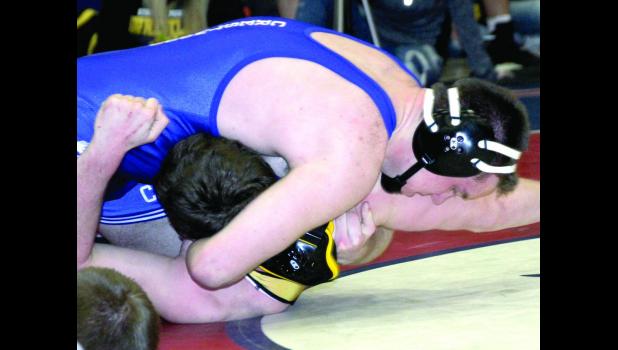 By:
Nate Troy
DECORAH - Crestwood junior Ryan Steffen (132), senior Trae Pecinovsky (152) and senior Trevor Trende (195) all grabbed second place at the Class 2A District 1 Tournament Saturday in Decorah to punch their tickets to the State Tournament, which starts Thursday at Wells Fargo Arena in Des Moines.
Steffen and Pecinovsky will both be making their third trip to State while Trende earned his first trip to Des Moines. Both Pecinovsky and Steffen placed fourth at State in 2016. With two wins at districts, Pecinovsky increased his career win total to 151, which is second-most in school history behind Brandon Mayer’s 157 wins.
No. 8 Steffen (42-7) will take on Zach Stewart (47-8) of Perry in the first round at State Thursday. No. 7 Pecinovsky (42-9) will battle No. 1 Joe Kelly (38-2) of West Liberty in the first round. Trende (36-12) will take on No. 4 Jackson Mikkelson (43-9) of Creston Orient Macksburg at State.
Although five other Cadets who competed at districts didn’t place in top two to advance to State, all eight Crestwood wrestlers at districts battled hard.
Kaden Anderlik (113) and Colter Bye (138) both finished third. Matthew Slifka (106), Chris Guest (145) and Jacob Knutson (285) all finished fourth at districts.
“Matthew Slifka lost two tough matches at 106 against some ranked kids (Carter Weeks of Vinton and Dylan Robinson of New Hampton),” Cadet Coach Keith Slifka said. “Our district was extremely strong at every weight class. To say our district was a mini-state tournament is not an exaggeration.
“Kaden lost a tough match (4-2) to Gabe Lewis of Denver-Tripoli (before he beat Mason Cleveland of New Hampton). I am sure Kaden will use that match he lost as motivation for next year. This year, every match he will watch at State will rejuvinate him,” Slifka said.
The coach was pleased to see Ryan Steffen qualify for State at 132 despite losing an 8-2 decision to Noah Fye of New Hampton in the finals.
“Ryan has seven losses going into the State Tournament, and at least five of those are against Fye,” Slifka said. “Ryan will be ready for State.
“Colter Bye (138) wrestled his heart out and finished third. Chris Guest had a tough bracket at 145 and took fourth,” Slifka said.
The coach gave kudos to Trae Pecinovsky for wrestling hard and earning his third trip to Des Moines. Trae won a decision over Patyon Pelke of Union before losing an 8-6 decision over Cael Krueger of Denver in the finals. However, he battled back to pin Bryan Graves of Oelwein in the wrestleback to take second.
“Trae came within an eyelash of pinning Krueger (in the finals),” Slifka said. “It was great to see him get his 150th win (against Denver in the semifinals). I’m very happy and excited for Trae, Ryan and Trevor to make it to State.”
At 195, Trevor Trende lost his first match before pinning Chase Boddicker of CPU and Andy Lillegraven of Decorah in the second place match.
“Trevor has been wrestling Lillegraven all season long, and he has beaten Lillegraven three of five times,” Slifka said. “I can usually tell a few seconds after the match starts how it’s going to go. With Trevor’s second place match, I turned to (assistant coach) Justin Denner, and I said, ‘Trevor’s got this match. He’s going to win.’ That win was a good way to end the day for us. It was a very emotional day.”
At 285, Jacob Knutson competed hard before losing by fall to Mike Ahrendsen of Union and losing a 3-0 decision to Brock Farley of Denver-Tripoli.
“Jacob had a very tough bracket at 285 pounds,” Slifka said. “Overall, we placed third as a team, which made me happy. We’re still a young team.
“We have two seniors and one junior going to State this year, and everyone else will be back next year. It’s exciting to have so many kids returning next season. Plus, we’ll have three kids coming back (Steffen, Anderlik and Jacob Knutson) who have competed at State, which is always fun to build around,” Slifka said.