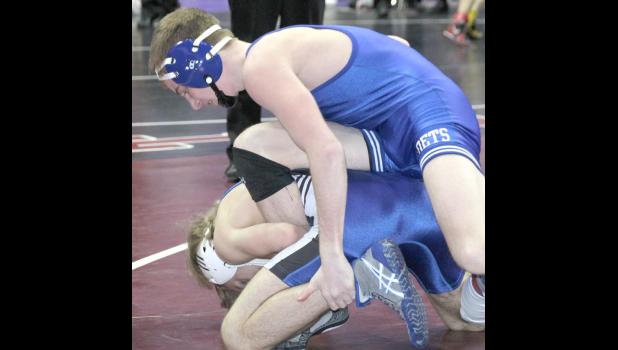 By:
Nate Troy
DES MOINES - Cadet wrestlers Ryan Steffen (132), Trae Pecinovsky (152) and Trevor Trende (195) all represented Crestwood High School well at the Class 2A State Wrestling Tournament last week.
Junior Ryan Steffen grabbed fifth place at 132 pounds, senior Trae Pecinovsky took sixth at 152 and Trevor Trende battled hard at 195, but he did not place in the top eight. As a team, the Cadets placed 27th overall with 18 points. Solon won the team title with 96.5 points while New Hampton was second with 96 points.
At 132, No. 8 Steffen chalked up a 3-2 win over Zach Stewart of Perry in round one and won a 7-0 decision over Nate Lasher of Charles City in the quarterfinals. In the semifinals, No. 4 Brant O’Shea of Keokuk won an 8-6 decision over Steffen. After losing 5-4 to Brayden Curry of Sergent Bluff-Luton, Steffen won an 8-0 major decision over No. 6 Noah Fye of New Hampton to place fifth.
“This was Ryan’s third trip to State and each time he has made it to the semifinals,” Cadet Coach Keith Slifka said. “Ryan was fifth this year, fourth in 2016 and fifth in 2015. Overall, he had a good State Tournament. As a coach, I’m very proud of the way Ryan wrestled. It was good to see Ryan finish State with a major decision over Fye, and I was very excited for Ryan.”
Competing at 152, No. 7 Pecinovsky was pinned by No. 1 Joe Kelly of West Liberty in the first round. Pecinovsky battled back to pin Sam McMillin of Bedford at 3:27 in the first round consolation match. Pecinovsky won a 5-3 decision over Derek Fox of Osage and pinned Kade Kelso of Central Decatur at 1:49 to advance to the consolation semifinals. Pecinovsky lost a 7-1 decision to John Tuttle of Spirit Lake Park, and he lost by fall to No. 9 Cael Krueger of Denver-Tripoli to place sixth.
“Trae didn’t end the State Tournament the way he wanted to, but I am very proud of the way Trae wrestled,” Slifka said. “Trae had a very tough bracket. Any time you can get a medal at State is great. He finished sixth at State this year, sixth in 2016 and qualified in 2015. He will finish his Crestwood career with the second most wins (154) and most pins (90) in school history. He had a good State Tournament.”
Wrestling at 195, Trende lost by fall to No. 4 Jackson Mikkelsen of Creston-Orient-Macksburg in round one. In the consolation first round, Trende pinned Christian Harder of Gilbert at 0:52. Trende lost an 8-2 decision to Matthew Landsperger of Knoxville in the second round consolation match. Trende didn’t place in the top eight.
“Trevor lost in the first round, but he did a good job of bouncing back to win his first round consolation match,” Slifka said. “Even though he fell short in his next match, I’m very proud of Trevor. He worked very hard in the summer to get ready for the season. I know Trevor is disappointed he didn’t get a medal, but as a coach, I’m proud of all of his hard work.”
Crestwood results
132: Ryan Steffen 5th
First rnd - Steffen (CW) won 3-2 dec. over Zach Steward (P); Quarter - Steffen won 7-0 dec. over Nate Lasher (CC); Semi - Brant O’Shea (K) won 8-6 dec. over Steffen; Cons. semi - Brayden Curry (SBL) won 5-4 dec. over Steffen; Fifth - Steffen won maj. dec. 8-0 over Noah Fye (NH).
152: Trae Pecinovsky 6th
First rnd - Joe Kelly (WL) won by fall over Pecinovsky (CW) 1:46; Cons. first rnd - Pecinovsky won by fall over Derek Fox () 3:27; Cons. second rnd - Pecinovsky won 5-3 dec. over Kade Kelso (CD); Cons. semi - John Tuttle (SLP) won 7-1 dec. over Pecinovsky; Fifth - Cael Krueger (DT) won by fall over Pecinovsky 1:53.
195: Trevor Trende
First rnd - Jackson Mikkelsen (COM) won by fall over Trevor Trende 3:52; Cons. first rnd - Trende won by fall over Christian Harder (G) 0:52; Cons. second rnd - Matthew Landsperger (K) won 8-2 dec. over Trende.