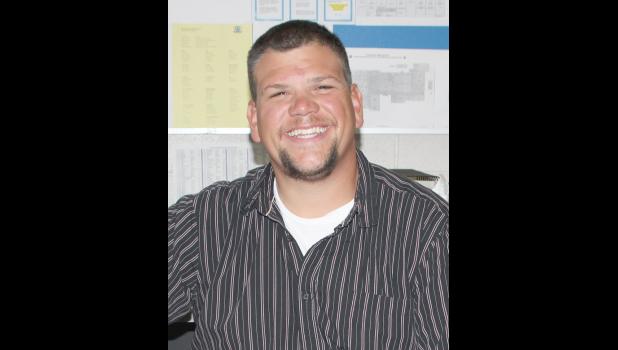 By:
Nate Troy Sports Editor
CRESCO - After teaching and coaching in Ames for the past seven years, Caleb Shaeffer said that coming to Crestwood High School recently to serve as the new Athletic Director/Dean of Students feels very comfortable for him.
Shaeffer, who is engaged, has a dog and recently moved to Elma, started his new duties at Crestwood in late July. He said Crestwood High School reminds him of Ballard High School in Huxley, Iowa, where he graduated in 2004. Ballard is similar to Crestwood in size, and it draws in students from smaller surrounding towns.
After high school, Shaeffer earned his first bachelor’s degree from Simpson College in communications and sports administration. He garnered his second bachelor’s degree from Grand View University in secondary education and social sciences. Then he earned his master’s degree in educational leadership from Viterbo University.
“I’m looking forward to helping lead a pretty driven community which is already here,” Shaeffer said. “I really love working with kids and families, and I’m excited to get the chance to do that.
“Coming to Crestwood to me almost felt like coming back home. Ballard is similar to here because there are four nearby towns (Huxley, Cambridge, Kelly and Slater) that make up the school.
“Certain small towns have their niches, which is how I grew up. I’m used to the small town feel, and it feels nice. The people I’ve met in Cresco are very nice, friendly and they are super willing to help,” Shaeffer said.
He noted he has three main goals for the 2018-19 school year.
“First, I want everyone at Crestwood to take pride in being a Cadet,” Shaeffer said. “By this I mean I want more kids to get involved in school activities. I want to increase our numbers in everything we do at Crestwood. I want to get more kids involved, which could include coming to more games, being in the band, joining a sports team or joining another activity. I want more kids to feel like they are a part of something at the school.
“Secondly, I want to encourage more community service and learn how we (at Crestwood) can partner with the community. How can we not only ask for things from the community, but what can they get from us?
“Finally, I’d like to see everyone get better every day. One of my coaches in school used to ask us how we can get better every day, and I’ve bought into that,” Shaeffer said.