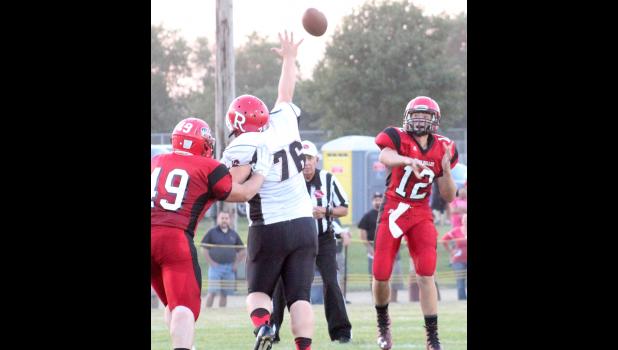 Riceville rallies to trip No. 6 Turkey Valley in overtime

By:
Nate Troy
JACKSON JUNCTION -  The Riceville Wildcats rallied from a 28-22 third quarter deficit to nip the Eight-Man No. 6 Turkey Valley Trojans, 52-44, Friday in overtime to hand the Trojans their first loss of the year (3-1 overall, 1-1 district).
After tying the game at 44-all at the end of the fourth quarter, Riceville tallied the game winning score in overtime on a seven-yard touchdown run by quarterback Jon Miller and a two-point pass from Miller to Grant Shedenhelm. Miller paced the Wildcats on offense as he finished with 334 yards rushing, five rushing touchdowns and two passing scores.
“It was a hard-fought football game between two teams trying for a district championship,” TV Coach Mark Scott said. “The winner has a leg up on the district race, and the loser can’t afford to stumble (during the rest of the season).
“We led for most of the game, but Riceville’s size and physical play wore us down late in the game when we needed crucial stops. We will travel to AGWSR (on Sept. 22). They will play a similar style to Riceville,” Scott said.
The game started well for the Trojans as Will Einwalter raced 60 yards to paydirt to give TV a 6-0 lead in the first quarter.
Turkey Valley took a 14-0 lead early in the second on a one-yard run by Ethan Leibold and Einwalter’s two-point run. However, Riceville answered with two touchdowns to take a 16-14 lead. TV responded with a two-yard touchdown run by Einwalter to give the Trojans a 20-16 halftime lead.
TV outscored Riceville 8-6 in the third period to take a 28-22 lead into the fourth. Cale Reicks raced 64 yards for a touchdown, and Leibold ran the ball in for two points.
In the fourth, each team traded scores. Miller scored on a one-yard run for the Wildcats before Braeden Baumler scored on a one-yard plunge for TV. Einwalter ran the ball in for two points.
After Miller reached paydirt on a 44-yard run, Leibold completed a 60-yard touchdown strike to Einwalter followed by a two-point run by Reicks. Late in the fourth, Miller completed a 24-yard touchdown pass to Shedenhelm. Miller’s two-point run tied the game at 44 to send the game into overtime.
Statistics
TV quarterback Ethan Leibold completed 10 of 18 passes for 173 yards and one touchdown. Will Einwalter nabbed four receptions for 97 yards and one score. Cale Reicks had four receptions for 49 yards, and Braeden Baumler had two catches for 27 yards.
Einwalter tallied 103 yards rushing and two scores on 12 carries (8.6 yards per carry). Cale Reicks posted 102 yards and one score on 10 carries. Baumler had 52 yards and one touchdown. Leibold gained 14 yards rushing and had one score.
On defense, Leibold posted 8.5 total tackles, including six solo stops. Cale Reicks and Kannon Leuenberger each had eight tackles. Leuenberger had one fumble recovery. Einwalter had 7.5 stops. Luke Mueller had 6.5 tackles. Eli Nymeyer had six tackles and one interception. Baumler posted 4.5 tackles, and Dylan Elsbernd had four tackles.