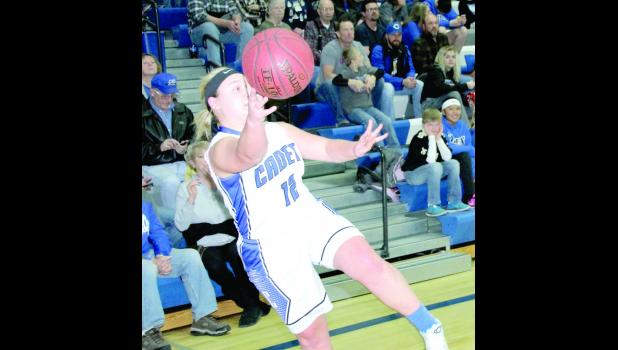 By:
By Nate Troy
CRESCO - Stout defense and solid play on offense helped the No. 4 Crestwood varsity girls’ basketball team improve to 12-0 overall as the Cadets crushed Charles City, 66-28, Friday at home; and they ripped North Fayette Valley, 75-45, Saturday.
Cadets 66, C.C. 28
A 19-0 run by Crestwood in the first quarter allowed the Cadets to build a commanding lead as they sailed to a 66-28 win over the Comets Friday at home.
Crestwood pushed its lead to 44-7 at halftime as the Comets were held to only one field goal in the first half. The Cadets went on a 13-9 run in the third period to extend the lead to 57-16 going into the fourth.
Defense was a big key to the win, according to Cadet Coach Doug Sickles.
“I thought our rotation on defense was outstanding,” Sickles said. “Our goal in every game is to play harder than our opponent, and in the first half we won that battle. We won the 50-50 balls. I was extremely happy with our play on defense.
“One thing that frustrated me a little bit was our getting into foul trouble in the first half. We had some silly fouls away from the basket, which we need to clean up.
“Defensively, Ellie Friesen was outstanding. Ellie finished with nine steals. She was a ball-hawk. Offensively, we shared the ball well. We finished with 18 assists and only eight turnovers, which is good. In most games, you’ll take that.
“Shannon Pisney played outstanding on offense and defense. Emily Friesen on defense was a ball-hawk for us. Kaylee Thomas gave us some good minutes. Our two post players (Tracy Martinek and Sharon Goodman) both played very well,” Sickles said.
Ellie Friesen led the charge for the Cadets with 24 points, including one three-pointer, had nine steals, five assists and three rebounds. Shannon Pisney tallied 11 points, nine rebounds and four assists.
Emily Friesen tossed in nine points, including two threes, had four rebounds, four assists and three steals. Tracy Martinek had eight points, two rebounds and two steals. Sharon Goodman had four points, three rebounds and two blocks.
Brynn Bodermann had four points, three steals and two assists. Kaylee Thomas and Karley Freidhof each had three points on one three-pointer. Lauren Reicks and Blair Bodermann each had one rebound and one steal.
Score by quarters
CC    0   7    9   12  - 28
CW 19  25  13   9  -  66
Cadets 75, NFV 45
Crestwood opened Saturday’s game against North Fayette Valley with a 29-9 run in the first quarter on its way to an impressive 75-45 win over the Tigerhawks.
The Cadets pushed their lead to 47-23 at halftime and led 64-33 going into the fourth period.
“One of the biggest keys for us (against NFV) was getting off to a fast start,” Coach Sickles said. “North Fayette Valley played a tight zone defense on us, but we shot the ball well from outside and finished with 13 three-pointers. When a team packs in their zone defense, you need to find other ways to score, and we did.
“Defensively, I was fairly pleased with how we played, but we still need to tighten things up. Emily Friesen, Tracy Martinek and Sharon Goodman all played well on defense. Offensively, Shannon Pisney, Ellie Friesen and Brynn Bodermann shot the ball well and all three had big games,” the coach said.
Shannon Pisney finished with 21 points, including two three-pointers, had eight rebounds and two steals. Ellie Friesen tallied 21 points, including five three-pointers, had seven assists, four rebounds and two steals. Brynn Bodermann had 18 points, including four three-pointers, six assists and two rebounds.
Sharon Goodman had six points, three rebounds and three blocks. Kaylee Thomas tallied four points, including one three-pointer, and one assist. Lauren Reicks had three points on one three-pointer. Blair Bodermann and Emily Friesen each had two rebounds.
Score by quarters
CW  29   18   17   11  - 75
NFV  9   14   10   12  - 45