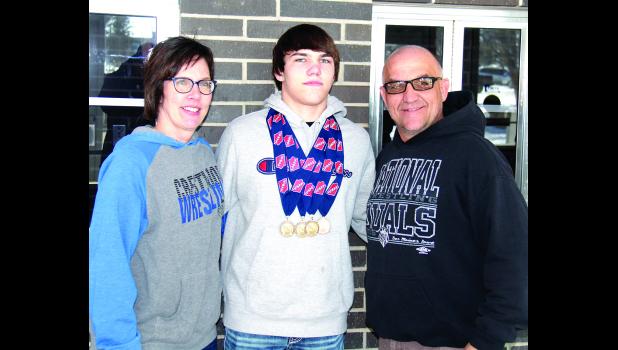 Interview with the four-time champion

By:
Nate Troy Sports Editor
CRESCO - Shortly after the Class 2A State Wrestling Tournament, I went to Crestwood High School to interview Cresco/ Crestwood’s only four-time State Champion - Carter Fousek.
While Fousek has every right to walk the halls of Crestwood like a king might strut through his castle, people who know him realize that’s not his style. Fousek is modest, humble and down-to-earth.
Fans who have followed him over the years might assume he was born wearing a singlet and headgear, but it took a few years for him to get hooked on wrestling.
“My older brother, Hunter, got me excited about wrestling when I was four-years-old,” Fousek said. “When I first started, I really didn’t know much about the sport. My parents asked me if I wanted to wrestle, but I was too scared at first.
“However, they kept asking me and finally, I said, ‘Sure.’ I won the first couple of tournaments I competed in, and I started to enjoy wrestling a lot,” the champ said.
Although it is considered an individual sport with of the one-on-one aspect, wrestling is also a team sport because of the fact that each wrestler can score between three and six points during a match, which goes toward the team score.
Even though he has accumulated many individual accolades, Fousek said he enjoys the team concept the most.
“I like the team aspect more than the individual things,” Fousek said. “It’s more fun to be a part of the good teams (that Crestwood has had).
“Joining Seabolt Wres-tling Academy (when I was in fourth grade) was when I saw my biggest improvements in wrestling. I have also really enjoyed being part of the Crestwood High School team and competing  at State. It’s great to have a team that supports you,” the Cadet said.
Seabolt Wrestling Academy was founded several years ago by T. J. Seabolt, a four-time State Champion (2003-06) from Centerville. Seabolt originally instructed wrestlers in Mason City before moving  to Jefferson, Iowa.
“T. J. has taught me a lot of wrestling moves, but he also teaches (his students) about the mental aspect of the sport,” Fousek said. “He tries to make wrestlers tougher. We go through thousands of repetitions to get certain moves down so that it’s second nature to us.”
Fousek is looking foward to competing at Iowa State University next year, but he said there is a lot he will miss about being a Cadet.
“I will never be on the same team with these guys (Crestwood teammates) again,” the champion noted. “This was the last year I was able to be with them. I will really miss being a part of this Cadet team and traveling with my teammates.
“The team aspect of wrestling makes the sport way more enjoyable. Being able to cheer on your teammates and them cheering on you makes it great,” he said.
Looking back on his final match against Logan Arp of South Tama in the championship bout at State on Feb. 19, Fousek noted he was confident going into the match.
“I still prepared the same way (for that match) that I would against anyone,” he recalled. “I thought I might be nervous, but really, I was pretty calm during the match. I knew what I had to do to win, and I got it done.
“I knew my parents would be nervous for  me, but they’ve always believed in me. So I had no doubt (that I would win).
“After the match, it was kind of mind-blowing for me that I actually achieved one of my life-long goals of winning four State Titles,” said the champion.
Fousek is ready to hit the mat for the Iowa State Cyclones next season.
“I’m looking forward to being a part of a high-level college team,” he said. “I’ll be surrounded by guys who have goals similar to mine. It will be cool to be a part of a great Division I team in Iowa State.
“I want to win individual championships at Iowa State, but I’m also looking foward to winning duals as a part of a team," the champion noted.