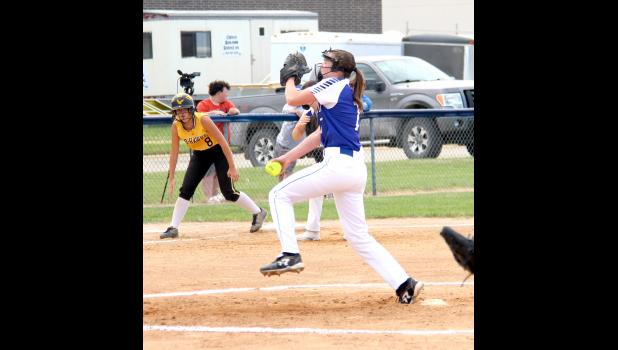 By:
Nate Troy Sports Editor
CRESCO - In a battle of two high-powered offensive teams, the Crestwood softball team split a home twinbill against Waverly-Shell Rock on June 21. The Go-Hawks rallied to win game one, 8-6; and the Cadets crushed W-SR, 16-6, in game two.
Facing Turkey Valley in a non-conference game on June 23 at Jackson Junction, a late Cadet rally fell short as the Trojans held on for a 4-3 win.
Playing at Charles City on June 24, the Cadets rallied from an early three-run deficit to nip the Comets, 4-3.
Crestwood (12-6) will host New Hampton  (8-11) in the first round of the Class 3A Region 7 Tournament on Wednesday, July 6 at 7 p.m. The winner will face either Dubuque Wahlert (18-14) or Waukon (5-14) on July 9 at 7 p.m. at Crestwood. The region final will be on July 12 at 7 p.m. at a site to be determined.
G1: W-SR 8, Cadets 6
In game one, Crestwood led 5-2 after three innings before Waverly-SR rallied for six runs in the sixth to post an 8-6 win.
The Cadets scored two runs each in the first and third innings and one each in the second and seventh innings.
Kyleigh Foster had one single. Olivia Ollendick had one triple, one run and one sacrifice. Nevaeh Howe had one single and one RBI.
“Waverly hit the ball well,” Cadet Head Coach Alicia Denner said. “We came up with a big home run late in the game. Our bats came alive in game two.”
Emily Voyna tallied one hit, one stolen base and one run. Britain Ferrie had one double and three RBIs. Elyse Rissman had one double, one run and one RBI. Tara Koshatka scored two runs. Blaire Cummings scored one run.
Foster was the losing pitcher. She went seven innings, allowed 10 hits, eight earned runs, five walks, hit one batter and struck out five.
Score by innings
WSR  0 2 0 0 0 6 0 - 8
CW    2 1 2 0 0 0 1 - 6
G2: Cadets 16, W-SR 6
In game two, the Cadets scored five runs each in the first and second innings and cruised to a 16-6 win in six innings.
Crestwood racked up 14 hits, including three doubles, in the second game.
Foster tallied three hits, including one double and three runs scored. Olivia Ollendick had two singles, two runs and one stolen base. Howe had three hits, including one double and one RBI.
Voyna had one single, one run and three RBIs. Britain Ferrie had one single, two runs, two RBIs and one stolen base. Tierney Perkins had three runs, one RBI and one stolen base.
Rissman had two hits, including one double and three RBIs. Quinna Ollendieck had one single and one RBI. Laney Peter had one single, one run and one RBI. Cummings scored two runs. Allison Ferrie scored  one run.
Erica Ollendick was the winning pitcher. She went three innings, allowed seven hits, six runs (five earned), four walks and struck out three. Foster tossed three innings, allowed one hit, one walk and struck out six.
Score by innings
WSR  1 0 3 2 0 0 - 06
CW    5 5 1 2 2 1 - 16
TV 4, Cadets 3
Crestwood rallied to score two runs in the top of the seventh on a two-run homer by Foster but it wasn’t enough as TV held on for a 4-3 victory on June 23.
The Trojans took a 1-0 lead in the first before the Cadets tied the game at one-all in the top of the third. Turkey Valley scored three runs in the sixth to take a 4-1 lead.
“We lost a close game to Turkey Valley,” Denner said. “Kyleigh Foster got her 100th strike out for the season and has well over 300 strikeouts for her career.”
Foster tallied two hits, including one home run, had one run and two RBIs. Olivia Ollendick had one hit.
Rissman posted two hits and one run. Peter had one hit, one run and one RBI.
Foster was the losing pitcher. She tossed four innings, allowed for hits, three earned runs and struck out five. Erica Ollendick pitched two innings, allowed three hits and one earned run.
Score by innings
CW  0 0 1 0 0 0 2 - 3
TV   1 0 0 0 0 3 x - 4
Cadets 4, C. City 3
Charles City took a 3-0 lead after one inning before the Cadets rallied late to notch a 4-3 win.
Crestwood tallied two runs in the second and one each in the sixth and seventh innings.
“This was a big win against Charles City,” Denner said. “Olivia Ollendick and Quinna Ollendieck made a big double play to seal the win."