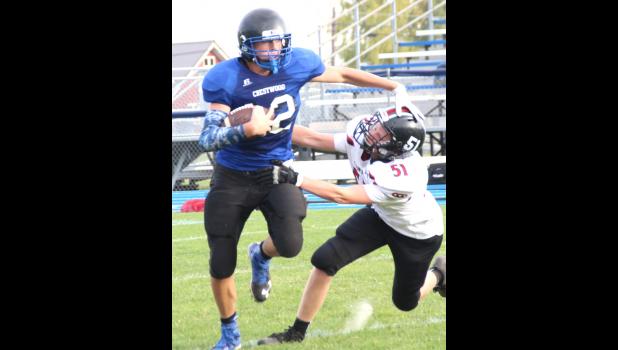 By:
Nate Troy
RESCO -  After a slow start, the Crestwood ninth grade football team rebounded and took control during Friday’s game against Clarion-Goldfield-Dows as the Cadets trounced the Cowboys, 60-8, to improve to 4-0.
In the first quarter, Clarion-GD took advantage of a Cadet fumble to score the first touchdown and take an 8-0 lead. However, on the ensuing kickoff, Sawyer Swatek raced 81 yards to paydirt to cut the Cowboys’ lead to 8-6. The two-point conversion was no good.
Later in the first quarter, Kade Munkel nabbed a 35-yard touchdown pass from Carter Henry. The two-point try failed. Crestwood pushed the lead to 20-8 after Reid Wiley caught a six-yard touchdown pass from Henry, who ran the ball in for two points.
In the second quarter, Munkel caught a 28-yard touchdown pass from Henry, who ran the ball in for two points to make the score 28-8. A couple minutes later, Henry scored on a 57-yard scamper. Henry completed the two-point pass to Reid Wiley. The Cadets added two points right before halftime when Andy Osmonson tackled a C-G-D player in the end zone to give the Cadets a 38-8 halftime lead.
In the third period, Henry scored on a quarterback sneak from one yard out, but the two-point conversion failed. Later in the third, Walker Sobolik scored on a seven-yard run. Gabe Grabau caught the two-point pass.
In the fourth quarter, Munkel intercepted a C-G-D pass and raced 62 yards for a touchdown. Grabau ran the ball in for two points to make the score 60-8.
Offensively, Carter Henry had 91 yards rushing and 104 yards passing. Mason Peter had 42 yards rushing. Sawyer Swatek had 39 yards rushing. Lawson Brown had 24 yards rushing. Trey Burnikel had 18, Gabe Grabau had 16, and Walker Sobolik had nine yards rushing,
Defensively, Mason Peter and Kade Munkel each had nine tackles. Gabe Grabau had eight, Andy Osmonson had seven. Sawyer Swatek and Trey Burnikel each had six. Carter Henry had five, including one sack. Cam Sobolik had five and forced and recovered a fumble.
“After a small mistake and allowing Clarion to score quickly, I knew our guys would step up and get things done,” Cadet Coach Nate Dietzenbach said. “We did a good job in all areas, offense, defense, and special teams.
“I was happy with the effort we continue to give through the whole game. This group is hungry to always score and always win in every way on every play, which is awesome to see. There are still things we can do better, which makes it more exciting as we get ready to play Osage (on Sept. 22),” the coach said.