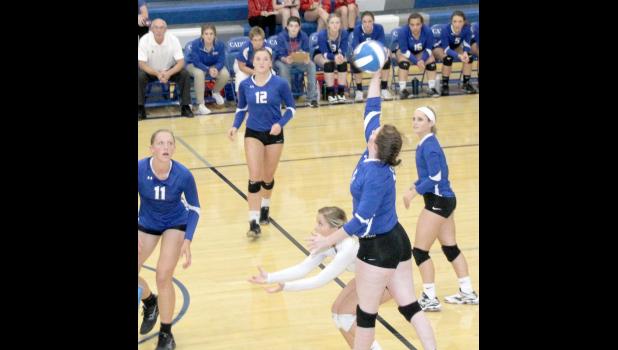 By:
Nate Troy
CRESCO -  Taking the court against a solid Decorah squad on Sept. 26, the Crestwood varsity volleyball team battled very hard before losing to the Vikings in four games (25-16, 27-29, 17-25, 23-25).
“We started the match how I thought we would play but did not finish,” Cadet Coach Robin Gossman said. “After set one, we went into a conservative mode and that is not how you win matches. The only way I can say it is, I was disappointed in our play. We had some nice effort at times but not consistently and consistency is what I am looking for.”
In game one, the Cadets took an early 3-1 lead on two serves by Maddie Steffen and one serve by Kayla Lentz. Decorah came back to snag a 6-4 lead before the Cadets went on a 5-0 run to take a 9-6 lead.
Decorah cut the Cadets’ lead to 16-10 before Kayla Lentz connected on five straight serves. The Cadets held on for a 25-16 win.
Game two was a fierce, back-and-forth contest. Decorah led 8-4 and 12-8 before the Cadets rallied to tie the game at 17-all on an ace by Emma Mannery. Three more serves by Mannery and two by Audrey Grinhaug gave the Cadets a 22-18 edge. However, a 5-0 run by the Vikes gave Decorah a 23-22 lead. The lead went back-and-forth until Crestwood tied the game at 27-all on a sideout. Decorah tallied the final two points to win 29-27.
Game three was close early. Crestwood held a 7-6 lead before the Vikings went on an 11-3 run to take a 17-10 lead. The Cadets were unable to get closer than seven points the rest of the game as Decorah won, 25-17.
In game four, Decorah took a 4-2 lead, but the Cadets rallied with a 5-0 run to go ahead 7-4 on four serves by Pisney. Crestwood took leads at 10-6, 14-12, and 19-17 before the Vikes rallied with five straight points to go ahead 22-19. Crestwood cut Decorah’s lead to 24-23 before the Vikings tallied the game-winning point.
Shannon Pisney tallied 12 kills, 13 digs, completed 17 of 19 serves and had one ace. Sharon Goodman had eight kills, seven blocks, completed eight of 11 serves and had two aces. Emma Mannery had 17 assists, four digs, completed 11 of 12 serves and had one ace.
Taylar Pecinovsky had 12 assists, four digs, completed 16 of 16 serves and had one ace. Brooklyn Ferrie had seven digs and two kills. Samantha Balk tallied three blocks. Memphis Sweeney had two digs and two kills. Jacey Bina had two kills.
Waverly Tournament
Playing at the Waverly Tournament Saturday, the Cadets battled hard before losing five matches.
Crestwood lost to Mount Vernon, 0-2 (13-21, 11-21); fell to Nevada, 0-2 (13-21, 15-21); was defeated by Denver, 1-2 (22-25, 25-12, 9-15); lost to Dyersville Beckman, 0-2 (21-23, 8-21); and lost to Grundy Center, 0-2 (15-21, 15-21).
“Although on paper it looks like we had a bad tournament, I believe the opposite,” Coach Robin Gossman said. “Going into this tournament, we knew the competition would be very high level. We did not win a match, but I think we played better than we did two weeks ago in Waukon. They are so close to turning the corner.”
Grundy Center match
Shannon Pisney had seven kills. Kayla Lentz was six of six serving and had seven digs. Emma Mannery had seven assists and three digs. Sharon Goodman had three kills and two blocks. Maddie Steffen had four digs. Amiah DeWolf tallied five digs.
Mt. Vernon match
Mannery posted six assists, completed six of six serves and had one ace. Kaylee Thomas tallied six digs, completed six of seven serves and had one ace. Pisney had six kills and two blocks. Lentz had nine digs. Goodman had three kills. Audrey Grinhaug had four digs.
Dyer. Beckman match
Lentz tallied 13 digs. Taylar Pecinovsky had nine assists and two digs. Mannery tallied seven assists and three digs. Pisney had six kills. Goodman posted eight kills and two blocks. Maddie Steffen had three digs.
Denver match
Mannery posted 18 assists, six digs and completed 12 of 14 serves. Pecinovsky had 15 assists, three digs, completed 13 of 13 serves and had three aces. Pisney posted 16 kills and two blocks. Goodman had six kills and two blocks. Lentz tallied 13 digs, completed 11 of 11 serves and had three aces. Sam Balk and Jacey Bina each had three kills.
Nevada match
Pecinovsky completed seven of seven serves and had three digs. Lentz tallied seven digs, and Steffen had six digs. Thomas had five digs, and Ashley Voves had four digs. Goodman had five kills.