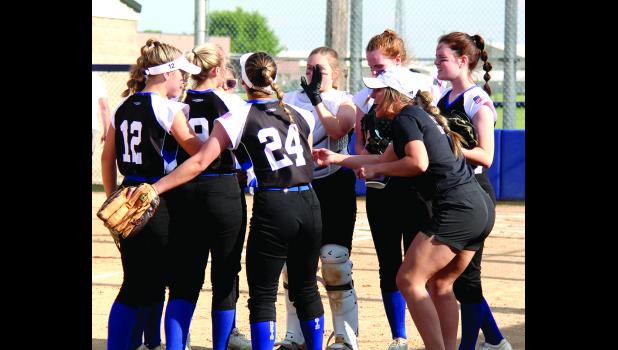 By:
Nate Troy Sports Editor
NEW HAMPTON - The Crestwood softball team racked up a combined total of 18 runs in two games to earn a sweep over New Hampton on June 14. The Cadets won game one, 6-3; and triumphed in game two, 12-7.
Playing at Waukon on June 17, the Cadets tallied three runs in the fifth inning on their way to a 3-0 win to improve to 10-4 overall.
G1: Cadets 6, NH 3
In game one, Crestwood built a 4-0 lead after three innings and held on to defeat New Hampton, 6-3.
The Cadets scored two runs each in the first and third innings and one each in the sixth and seventh innings. The Chickasaws tallied two runs in the fourth and one in the seventh.
“New Hampton hit very well and put our defense to the test,” Cadet Head Coach Alicia Denner said. “Tierney Perkins and Emily Voyna each had a timely RBI. Kyleigh Foster proves to be dangerous in the batter’s box no matter who the opponent is. She also had five strikeouts (pitching). It’s a blast to watch Foster dominate on both sides of the ball.”
Foster finished with three hits, including two doubles, drew one walk, had one stolen base and two runs. Olivia Ollendick tallied one hit, one walk and one run. Nevaeh Howe had one double and three RBIs.
Britain Ferrie had one hit, one walk and one run. Laney Peter had one single, one run, one stolen base and drew two walks. Tierney Perkins had one double and one RBI. Emily Voyna had one single, one stolen base, one run and one RBI. Elyse Rissman drew one walk.
Foster was the winning pitcher. She went seven innings, allowed six hits, three runs (one earned), one walk and struck out five.
Score by innings
CW  2 0 2 0 0 1 1 - 6
NH  0 0 0 2 0 0 1 - 3
G2: Cadets 12, NH 7
In a back-and-forth battle in game two, the Cadets broke a seven-all tie with three runs in the fifth on their way to a 12-7 victory.
Crestwood scored two runs in the first and four in the second to take a 6-1 lead. However, New Hampton answered with five runs in the third to tie the game at six-all. Each team scored one run in the fourth.
The Cadets plated three runs in the fifth and two insurance runs in the sixth.
“We are a much better offensive team when we can be a threat at all parts of the batting order,” Denner said. “We know that our biggest job is to score a lot of runs as quickly as possible.
“We faced some tough opponents, so we know that we need to have some insurance late in the game. Olivia Ollendick and Emily Voyna were a threat in the batter’s  box, both hitting .750 this game. Freshman pitcher Erica Ollendick gave us a great start to the game and Foster came back in (to finish the game),” the coach said.
Crestwood racked up 12 hits, including three doubles. Olivia Ollendick had three singles, four runs, one stolen base and one RBI. Foster had one single, two runs and one RBI. Howe posted one single and two RBIs.
Britain Ferrie had two hits, including one double, one run and two RBIs. Peter and Rissman each had one RBI. Voyna tallied three hits, including one double and two runs. Perkins had one double and two runs. Quinna Ollendieck had one single and one RBI. Blaire Cummings had one run.
Foster was the winning pitcher. She went four innings, allowed five hits, one earned run, hit one batter and struck out five. Erica Ollendick tossed three innings, allowed five hits, six runs (three earned), two walks and hit one batter.
Score by innings
CW  2 4 0 1 3 2 0 - 12
NH  1 0 5 1 0 0 0 - 07
Cadets 3, Waukon 0
Foster held the Indian batters to only three hits to help the Cadets bounce Waukon, 3-0, on June 17 in Waukon.
“Our bats did not come alive until late in the game, which presented some trouble for us offensively. The girls continued to play solid defense behind Foster who had nine strikeouts. Nevaeh Howe, Britain Ferrie and Emily Voyna had key RBIs. Emily Voyna and Kyleigh Foster both had high on base percentages and are key parts of our offense. Voyna has also proved dangerous on the basepaths," Denner said.