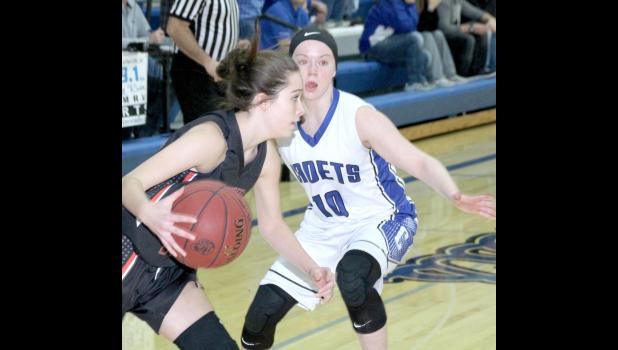 By:
Nate Troy
CRESCO - The Class 3A No. 3 Crestwood varsity girls’ basketball team earned a share of the Northeast Iowa Conference regular season title Thursday with a 51-24 win over Oelwein. Both Waverly-SR and Crestwood finished the season at 11-1 in the NEIC.
Facing Waukon in the first round of the Class 3A Region Tournament Saturday, the Cadets jumped out to a 27-13 halftime lead and held off the Indians for a 50-27 win. Crestwood (20-1) will advance to play New Hampton (15-7) in the region semifinals Feb. 15 at 7 p.m. at Crestwood. The winner will play either Mount Vernon or Anamosa in the region finals Feb. 18 at 7 p.m. at Manchester.
Cadets 51, Oelwein 24
Taking on Oelwein Thursday, the Cadets raced to a 16-2 first period lead and sailed to a convincing 51-24 rout of the Huskies.
The Cadets went on a 22-4 run in the second quarter to push the lead to 38-6 at halftime, and they led 51-18 after three periods.
“One of the biggest keys for us was getting off to that fast start on offense,” Cadet Coach Doug Sickles said. “Offensively, we didn’t try to do too much. Defensively, we played good defense for three of the four quarters.”
Sickles was pleased to see the Cadets earn a share of the NEIC crown, but he added the team can’t afford to slow down.
“The conference title was one goal the girls wanted to accomplish this year, but they also have other goals (such as getting back to State). I’m very proud of our seniors and how they’ve been playing,” the coach said.
Ellie Friesen led the Cadets with 15 points, including two three-pointers, had four rebounds and four steals. Shannon Pisney had 11 points, 10 rebounds and four assists. Brynn Bodermann tallied seven points, including one three-pointer, and had two steals.
Tracy Martinek had six points and three rebounds. Karley Freidhof had three points and six rebounds. Lauren Reicks had three points and two assists. Kaylee Thomas and Sharon Goodman each had two points. Goodman also had five rebounds and four blocks. Emily Friesen had four rebounds and three assists.
Final NEIC standings: 1 (tie). Crestwood 11-1, Waverly-SR 11-1; 2. New Hampton 8-4; 3. Waukon 5-7; 4. Oelwein 5-7; 5. Charles City 1-10; 6. Decorah 0-11.
Score by quarters
CW   16   22   13   0 - 51
Oel    2     4    12   6 - 24
Cadets 50, Waukon 27
The No. 3 Crestwood girls’ team took care of business Saturday in the first round of the region tournament with a 50-27 win over Waukon to advance to the region semifinals Feb. 15 against New Hampton.
Crestwood opened the game with back-to-back three-pointers by Shannon Pisney and Emily Friesen to grab a quick 6-0 lead. The Cadets pushed the lead to 15-7 after one period and took a 27-13 halftime edge. Crestwood went on a 16-4 third period run to extend the lead to 43-17 going into the fourth.
Cadet Head Coach Doug Sickles was glad to notch the win, but he noted there is room for improvement.
“I told our girls that district games are always tight,” Sickles said. “Our girls are used to scoring between 60 and 70 points per game, but this was a low-scoring game because shots were at a premium because Waukon tried to slow the game down.
“Waukon did what they needed to do to stay in the game, but we also made some good shots to pull away (late in the game). Defensively, I was happy overall with how we played except for a few minutes early in the fourth when Waukon out-hustled us. But overall, I was extremely happy with all of our girls,” Sickles said.
Shannon Pisney led the Cadets with 19 points, including two three-pointers, and had seven rebounds. Ellie Friesen posted 16 points, including two threes, had four rebounds, three assists and two blocks. Sharon Goodman had seven points, five rebounds and two blocks.
Emily Friesen and Brynn Bodermann each had three points on one three-pointer. Emily Friesen added five rebounds and two assists. Bodermann had two assists. Tracy Martinek had two points and two assists.
Score by quarters
Wauk  7    6    4   10 - 27
CW    15  12  16   7  - 50