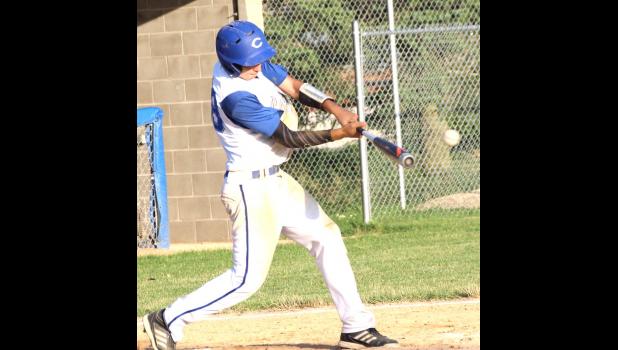 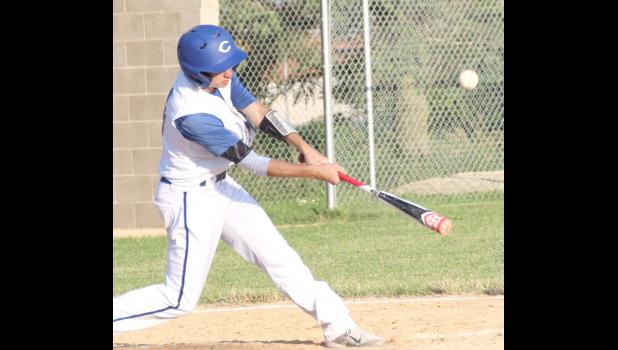 By:
Nate Troy
CRESCO - The Crestwood baseball team had a solid week on the diamond as it chalked up two conference wins.
The Cadets split two games against Waverly-Shell Rock on July 3, winning game one, 3-0, and losing game two, 0-2. Facing Waukon at home on July 5, Crestwood routed the Indians, 9-2. Playing Class 1A No. 2 Mason City Newman Friday at home, the Cadets struggled during a 13-1 loss in six innings.
Crestwood (10-18) will begin the Class 3A playoffs Friday, July 14 at 7 p.m. against Waverly-SR (22-8) at Waverly in the district semifinal. The winner will play either Decorah or Charles City in the district final July 17 at 7 p.m. at Waverly. The substate final will be on July 19 at Waverly.
Cadets 3, WSR 0 (G1)
In game one of the twinbill, the Cadets combined good pitching, hitting and fielding to down the Go-Hawks, 3-0.
Crestwood scored one run in the third and two in the sixth innings. Jon Henry had a single to drive in two runs in the sixth.
Cadet pitchers Clayton Ollendieck and Trae Pecinovsky combined forces to hold the Go-Hawks to only one hit. Pecinovsky pitched five innings in relief to earn the win, allowed no hits, four walks and struck out two. Ollendieck went two innings, allowed one hit, no walks and struck out three batters.
“Both Clayton and Trae did a tremendous job pitching,” Cadet Coach Gary Steffen said. “Waverly couldn’t get anything going on offense, and we got the job done. This was one of our best overall games of the year. It was nice to get the win because it gives us confidence.”
At the plate, Austin McAllister tallied two hits and one run. Shane Vokaty and Colten Wiley each had one hit. Trae Pecinovsky scored one run.
Clayton Ollendieck had one double. Jon Henry had two hits and two runs batted in. Kristian Szajna had two hits. Bryer Thompson had one run.
Score by innings
CW   0 0 1 0 0 2 0 - 3
WSR 0 0 0 0 0 0 0 - 0
WSR 2, Cadets 0 (G2)
In game two, Waverly-SR scored single runs in the third and fourth on its way to a 2-0 victory.
“We did a great job on defense, but we just had a couple hiccups with our pitching, and Waverly took advantage,” Steffen said. “On offense, we had some opportunities to score, but we ran ourselves out of the inning. We need to clean up some baserunning mistakes. Even though we lost, we played two quality games.”
Trae Pecinovsky posted one double. Jon Henry had two hits. Colten Wiley, Frank Hrdlicka, Colter Bye and Kristian Szajna each recorded one single.
Hrdlicka was the losing pitcher. He went three and two-thirds innings, allowed four hits, two earned runs and two walks. Szajna went two and one-third innings, allowed one hit and struck out three.
Score by innings
CW   0 0 0 0 0 0 0 - 0
WSR 0 0 1 1 0 0 x - 2
Cadets 9, Waukon 2
A fast start on offense combined with solid pitching and fielding lifted the Cadets to a strong 9-2 win over Waukon on July 5 at home.
Crestwood plated two runs in the first and three in the second to take a 5-0 lead. Waukon answered with two runs in the third, but the Cadets bounced back with one run in the fifth and three more in the sixth.
“Clayton Ollendieck did a good job of throwing strikes on the mound, and he had a great game at the plate with three hits,” Steffen noted. “Catcher Jon Henry had a nice play to pick off a Waukon runner at third base in the sixth. That was a big play which sealed the deal for us.
“Most of our lineup got the job done on offense. Overall, this was a well-played game for us. We’re hoping we can keep this momentum going into the playoffs,” Steffen said.
Clayton Ollendieck tallied three hits, including two doubles, and had four RBI. Austin McAllister had one hit, three runs scored and two stolen bases. Shane Vokaty had one hit, two runs and one stolen base.
Trae Pecinovsky had one double, two runs and one RBI. Spencer Cuvelier, Colten Wiley and Jon Henry each recorded one hit. Colter Bye had one triple, one run and one RBI. Kade Munkel had one run scored and one stolen base.
Clayton Ollendieck was the winning pitcher. He went seven innings, allowed six hits, two earned runs, four walks and struck out eight batters.
Score by innings
Wauk  0 0 2 0 0 0 0 - 2
CW     2 3 0 0 1 3 x - 9
M.C.Newman 13, Cadets 1
Mason City Newman showed why it is ranked No. 2 in Class 1A as the Knights beat Crestwood, 13-1, Friday.
The Knights led 5-0 after four innings before exploding for eight runs in the sixth to put the game out of reach. Crestwood tallied one run in the sixth on an RBI single by Colten Wiley.
“It was a competitive game until the sixth inning,” Steffen said. “Newman is ranked No. 2 for a reason. We had a couple chances at the plate, but we just couldn’t get the big hit when we needed it. Overall, the better team won. We need to move forward and get ready for the playoffs on Friday (against Waverly-SR).”
Crestwood finished with four hits. Austin McAllister, Clayton Ollendieck, Jon Henry and Colten Wiley each had one single. Zack Lane scored one run. Wiley had one RBI.
Ethan Hoppe was the losing pitcher. He tossed two and two-thirds innings, allowed six hits, four runs (two earned), three walks and struck out two. Frank Hrdlicka went two innings, allowed two hits, one earned run and one walk.