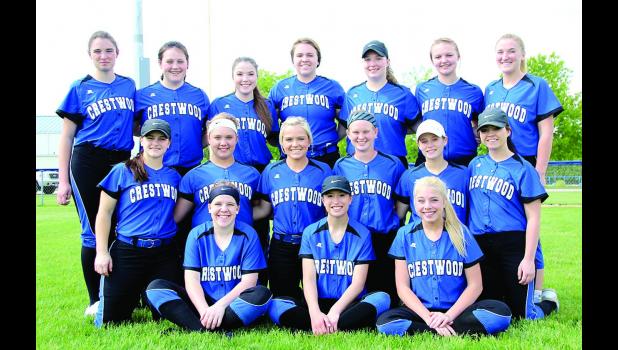 By:
Nate Troy
CRESCO - The 2017 Crestwood softball team fell one game short of making a trip to State, but by no means does that diminish the stellar season the girls enjoyed this summer.
The Cadets posted an impressive 24-9 overall mark, which included a 15-3 record and second place in the Northeast Iowa Conference. In the post-season, Crestwood advanced to the Region Final before losing to Center Point-Urbana, 5-6.
Crestwood players included: Kayleigh Dietel, junior; Karley Freidhof, senior; Shannon Pisney, junior; Taylar Pecinovsky, junior; Laken Lienhard, freshman; Lauren Reicks, senior; Danielle Ahern, junior; Kaylie Henry, senior; Hallie Frohn, sophomore; Kelsey Burnikel, senior; Madison Steffen, junior; Kaylee Thomas, junior; Kennedy Gaul, sophomore; Kristen Reicks, sophomore; Keelee Andera, freshman; Kayla Lentz, junior; Kailyn Erickson, freshman; Annie Mast, sophomore; Trista Foster, sophomore; Megan Ryan, senior; Emma Rissman, freshman; Ashley Voves, sophomore.
Crestwood started the season on a great note by winning seven of its first eight games. Competing at their home tourney on June 3, the Cadets beat Turkey Valley, 10-0, before losing to Mason City Newman and New Hampton.
The Cadets won five of their next six games to improve to 13-4 on June 15. Playing at the West Delaware Tourney, Crestwood went 2-2 with wins over East Buchanan and Maquoketa Valley. The Cadets closed the regular season strong by winning seven of their last nine to improve to 22-8. Crestwood downed North Fayette Valley (15-9) and West Delware (3-2) in the region tournament before losing to CPU.
“I thought our season went extremely well overall,” Coach Doug Sickles said. “Although we finished one win away from State, we had a lot of good things happen this season.
“Both of our starting pitchers, Laken Lienhard and Lauren Reicks, did an outstanding job all year long. Offensively, Laken finished at the top, or near the top, in several categories. Even though she was a freshman this year, she really carried us. Lauren Reicks had an outstanding four years on the varsity.
“Shannon Pisney did a great job leading us on offense as well as playing well at shortstop and first base. I was extremely pleased with the way Kristen Reicks developed as a catcher, and the way she threw out so many baserunners,” Sickles said.
The coach also gave kudos to seniors Megan Ryan, Kaylie Henry, Kelsey Burnikel and Karley Freidhof for all their hard work this season.
“As a team, our girls played with a mission this year,” Sickles noted. “They really like to compete and win. I think the fact that so many of them play multiple sports throughout the year really helps them.
“Our team defense was another reason why we were so successful this year. We were solid and consistent on the infield and the outfield throughout the year,” Sickles said.
In regards to areas of improvement, Sickles said he would like to see the returning players work on their hitting before next season.
“We were not always consistent with our hitting this year,” Sickles said. “During some of the weekend tournament games and some conference games, we didn’t put the ball in play enough. I’d like to see the girls improve their hitting. We need to step up and be more consistent on offense.”
Cadet statistics
As a team, Crestwood posted a robust .343 batting average, a .555 slugging average, tallied 217 runs (6.6 runs per game), posted 308 hits, including 95 doubles and 27 home runs, and had 184 runs batted in. Defensively, the Cadets posted a solid fielding percentage of .966.
Laken Lienhard paced the team at the plate with a .579 batting average, a 1.237 slugging average, a .598 on-base percentage, was first with 14 home runs, led the team with 46 RBI, first with 29 doubles, led the team with 66 hits and 50 runs.
Shannon Pisney had a .464 batting average, a .876 slugging average, tallied 40 runs, 45 hits, 12 doubles, eight home runs and 40 RBI. Lauren Reicks tallied a .410 batting average, had a .590 slugging average, tallied 18 runs, 41 hits, 16 doubles and 19 RBI.
Megan Ryan had a .350 batting average, tallied 36 hits, 15 runs, 12 doubles, two home runs and 21 RBI. Kaylee Thomas had a .296 batting average, posted 14 RBI, 29 hits, including eight doubles, and scored 14 runs. Kaylie Henry had a .307 batting average, had 24 runs, 27 hits and eight RBI.
Kristen Reicks had a .256 batting average, had 12 RBI and 22 hits. Kelsey Burnikel had 16 hits, 14 runs, five RBI and a .178 batting average. Annie Mast had a .297 batting average, tallied 12 runs, 11 hits, including four doubles and two home runs, and had 11 RBI.
Kayla Lentz had a .258 batting average, scored four runs, had eight hits, including four doubles, and six RBI. Taylar Pecinovsky had a .182 batting average, had three runs and two hits.
Keelee Andera scored seven runs, and Emma Rissman had five runs. Madison Steffen scored two runs. Kailyn Erickson, Trista Foster, Ashey Voves and Kennedy Gaul each scored one run.
In the pitching circle, Laken Lienhard tallied a 16-4 record, tossed 129 innings, allowed 82 hits, 48 runs (28 earned), had a 1.52 ERA, walked 12 batters, struck out 114, and held opponents to a .157 batting average.
Lauren Reicks had an 8-5 record, tossed 80 innings, allowed 60 hits, 41 runs (26 earned), had a 2.28 ERA, walked seven and struck out 66 batters.