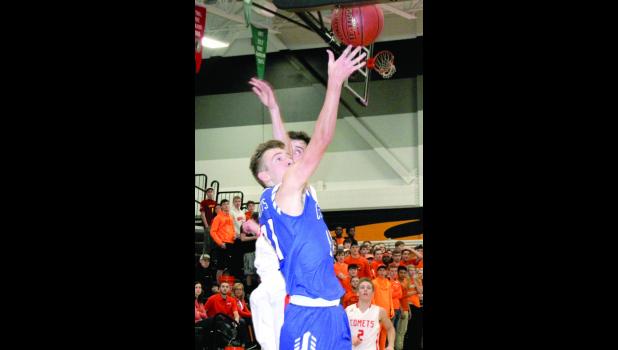 By:
Nate Troy
CHARLES CITY - A stellar group effort by the Crestwood boys’ basketball team allowed the Cadets to demolish the Charles City Comets, 60-37, Monday night in the Class 3A District 6 semifinal.
The win allowed the Cadets (9-12) to advance to the District 6 Final against Forest City (18-4) at 7 p.m. Feb. 23 at Forest City. The winner of this game will play in the Substate Final Feb. 27 at 7 p.m. in Aplington-Parkersburg.
Monday’s contest against Charles City started slow for Crestwood as the Comets took an early 6-3 lead. However, a three-pointer by Alex Kerian ignited a 15-2 run for the Cadets and gave them an 18-8 lead going into the second period.
Both teams traded buckets during the second period as Crestwood took a 35-23 lead at halftime. In the third period, the Cadets went on a 17-5 run to build a huge  52-28 lead going into the fourth, which put  the game on ice.
“Our guys shot the ball well,” Cadet Coach Lynn McCormick said. “Alex Kerian and Kristian Szajna both shot the ball very well, and our defense was excellent. We made Charles City work for everything they got, and we rebounded well. Overall, I thought we played harder than they did.
“We switched up our defense during the game from a man-to-man to a zone. As a team, we shot the ball as well as we have all year. I told Alex if he could make some early baskets, that would be a key for us. Our inside guys, Spencer Cuvelier and Clayton Ollendieck, did a great job on the boards. This was a great team win,” the coach said.
Alex Kerian finished with 15 points, including five three-pointers. Clayton Ollendieck also poured in 15 points.
Kristian Szajna had 13 points, including three three-pointers. Nathan Martinek had nine points, including one three-pointer. Spencer Cuvelier had four points. Jordan Girolamo and Jon Henry each scored two points.