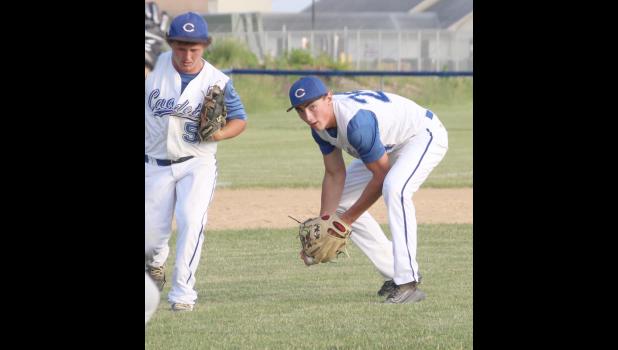 By:
Nate Troy
CRESCO - Facing a solid Oelwein squad on June 27 on the road, the Crestwood baseball team split a twinbill against the Huskies. The Cadets won game one, 4-0; and the Huskies posted a 10-1 win in the second game.
Playing a non-conference doubleheader in New Albin on June 29, Crestwood competed hard before losing both games to Lansing Kee, 4-5 and 4-5.
Cadets 4, Oelwein 0 (G1)
In game one, Crestwood pitcher Clayton Ollendieck held the Huskies to only four hits over seven innings to help the Cadets chalk up a 4-0 win.
Crestwood tallied one run each in the first, second, third and fourth innings.
“Clayton Ollendieck shut down Oelwein and pitched an outstanding game,” Cadet Coach Gary Steffen said. “We did a good job of manufacturing runs. This was one of our better games of the year.”
Ollendieck helped the team at the plate with two hits and one run batted in. Colten Wiley had two hits, including one double, and two runs scored. Austin McAllister had one hit, one RBI and one stolen base.
Spencer Cuvelier had one run scored and one stolen base. Trae Pecinovsky tallied one hit. Ethan Hoppe had one hit and one RBI. Kristian Szajna had one hit and one stolen base. Shane Vokaty had one run and one stolen base.
Ollendieck went seven innings, allowed four hits, no runs, five walks and struck out six batters to tally the win.
Score by innings
CW   1 1 1 1 0 0 0 - 4
Oel   0 0 0 0 0 0 0 - 0
Oelwein 10, Cadets 1 (G2)
In game two, the Huskies broke open a close game with five runs in the third on their way to a 10-1 victory.
Oelwein led 2-0 after one inning before the Cadets tallied one run in the second to cut the lead to 2-1. The Huskies answered with one run in the second, five in the third, one in the fourth and one in the sixth.
“We had trouble throwing strikes in game two,” Steffen noted. “In the first three innings, we gave Oelwein a lot of runs because of walks. Oelwein’s pitcher kept us off-balance, and we couldn’t get our offense going.”
Austin McAllister had two hits and three stolen bases for the Cadets. Shane Vokaty had one run and one stolen base. Kristian Szajna had one double and one RBI.
Ethan Hoppe was the losing pitcher. He tossed two and two-thirds innings, allowed five hits, eight runs (four earned) and walked seven. Stone Peckham went one and two-thirds innings, allowed one earned run, two walks and struck out one. Sawyer Peckham went one and one-third innings, allowed one earned run and walked four. Kristian Szajna pitched one-third of an inning and allowed one hit.
Score by innings
CW   0 1 0 0 0 0 0 - 1
Oel   2 1 5 1 0 1 x - 10
Kee 5, Cadets 4 (G1)
In game one, a late rally by the Cadets came up short as the Kee Hawks held on for a 5-4 win.
Kee led 5-1 after four innings before Crestwood tallied two runs in the fifth and one in the seventh to cut the lead to 5-4.
“In both games against Kee, we didn’t have any errors on defense,” Steffen said. “However, we gave Kee a lot of free bases because of walks and hitting batters. Colten Wiley had a very good night at the plate in both games.”
Austin McAllister had one hit, one run and one stolen base. Shane Vokaty tallied two hits, one run and two stolen bases. Trae Pecinovsky posted one home run, one run and three RBI.
Clayton Ollendieck had one stolen base. Spencer Cuvelier had one double and one run. Jon Henry had one hit. Colten Wiley had three hits and one RBI.
Kristian Szajna was the losing pitcher. He tossed three and one-third innings. Sawyer Peckman pitched two and two-thirds innings in relief.
Score by innings
CW   0 1 0 0 2 0 1 - 4
Kee  2 2 0 1 0 0 x - 5
Kee 5, Cadets 4 (G2)
In game two, Kee bounced back from a three-run deficit to nip the Cadets, 5-4.
Crestwood scored three runs in the fourth to take a 3-0 lead on a two-run home run by Spencer Cuvelier and and RBI single by Colten Wiley. Kee came back with three runs in the fifth and one run in the sixth to go ahead 4-3.
The Cadets tied the game in the top of the seventh when Stone Peckham doubled to drive in Wiley. Unfortunately for Crestwood, Kee threw out two baserunners at home to keep the score tied going into the bottom of the seventh. Kee scored the game-winning run in the bottom of the seventh on a squeeze bunt.
Frank Hrdlicka was the losing pitcher. He tossed four and one-third innings.
“Frank pitched well over the first four innings before he started to struggle,” the coach said. “We also struggled on offense by not executing bunts. On the positive side, we are right there going down to the wire  against some very good teams. We can be a dangerous team if we put everything together with our pitching, hitting and defense.”
Score by innings
CW   0 0 0 3 0 0 1 - 4
Kee   0 0 0 0 3 1 1 - 5