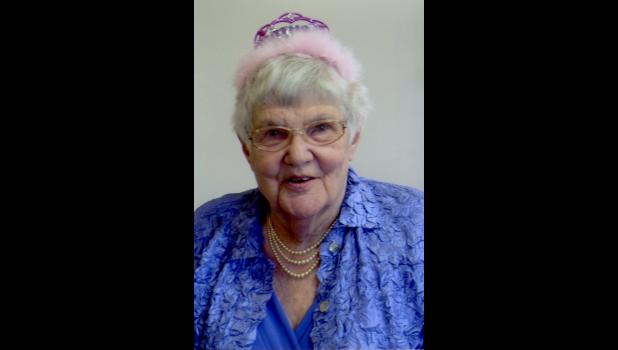 April 30, 1928 —
March 16, 2018
Decorah - Rose Justine Lionberger, age 89, of Decorah, Iowa died on March 16, 2018.
Memorial services will be at 10 a.m. Saturday, April 7, 2018 at Good Shepherd Lutheran Church in Decorah, with Pastor Amy Larson officiating. Graveside services will be held at 4 p.m. Saturday at Coon Prairie Cemetery in rural Westby, Wis.
Justine was born April 30, 1928 in Barnesville, Minn. to Theodore and Rose (Wessel) Holum. Due to the death of her mother 10 days after her birth, Justine was adopted by her aunt and uncle, Rev. James and Signe Holum, and raised in Westby, where she attended Westby High School and graduated as valedictorian.
Justine attended Luther College, where she sang in the Nordic Choir and graduated in 1950 with a B.A. in Classical Languages. She won a Fulbright Scholarship to study in Athens but chose to marry her college sweetheart Paul Lionberger instead. They were wed on June 4, 1950. Their married life began in a lumber camp in northern Idaho and continued in Minneapolis, Minn.; St. Marie’s, Idaho; Decorah; Virginia Beach, Va.; Parris Island, S.C.; Quantico, Va.; Great Lakes, Ill.; Keflavik, Iceland; Cherry Point, N.C.; Lynwood, Wash.; Kodiak, Alaska; and Talinn, Estonia. Roughly the last 30 years of which were spent in Decorah.
While Paul was fulfilling his duties as a Lutheran pastor, Justine wore many hats. She was a church organist and choir director, a Bible teacher, retreat leader and speaker. She held leadership positions in many different churches, including a stint as Congregational President of Good Shepherd Lutheran Church in Decorah.
Justine was a witty and humorous writer and wrote skits, plays, Christmas programs, musicals, radio programs, stories and poems, many of which she shared with her church family and friends. Her Christmas letters, in poem format, were always enormously entertaining, revealing her clever, natural sense of humor and fun.
During Paul’s 17 years in active military service, Justine’s love of the classical languages served her well. She taught Latin and English in several schools, including a semester teaching Latin and Greek at Luther College, and spent a summer doing graduate study in Latin and Greek at the College of William and Mary. As a Naval Officer’s wife, Justine was twice President of the Officer’s Wives Club and earned recognition in both the Red Cross and Navy Relief.
Justine spent 20 years as a Girl Scout leader, specializing in astronomy and archery. Ultimately, she became Council President in Illinois and Vice President and Legislative Monitor in North Carolina. She took senior scouts to the International Center, Our Cabana, in Mexico and represented Iceland at the Our Chalet in Switzerland. Throughout, Justine simultaneously raised her four daughters.
When Paul retired from the Navy, they moved back to Decorah, where Justine helped tend their 175 acres of land. She spent each fall harvesting apples and grapes. She was renowned for her exceptional grape pie and baked bread every week. She loved to sew, needlepoint and quilt. On the side, Justine served as museum tour guide at Vesterheim Norwegian-American Museum, drawing on her deeply cherished Norwegian heritage.
Beginning with a study trip to Greece and Italy, Justine developed a love for foreign travel. Together with Paul, she traveled to over 40 different countries. She taught English while living in Estonia and Poland. She was a perpetual scholar, taking Latin, Greek and Hebrew courses as an adult. Justine’s heart belonged to books from the first to the last. She devoured books of every length and subject throughout the entirety of her life, including her last days.
A gifted musician, Justine learned piano early on, sang in numerous choirs, became proficient at the organ as an adult and took violin lessons when Paul was serving in Vietnam.
Justine worked tirelessly to support refugees around the world. She devoted much time to the LIRS (Lutheran Immigration Refugee Service) and attended an LIRS conference in New York City. She gave freely and generously to people in need and opened her home to a family of Laotian refugees for over 20 years.
She is survived by her four daughters, Mary (Doug) Marske of Spencer, Iowa, Ann (Mitch) Baker of Annapolis, Md., Ruth Booman of Beaufort, S.C. and Martha (Paul McQuade) Lionberger of New Market, Tenn.; eight grandchildren, Katie Marske, Laura (Aaron) Dietrich, David (Catie) Booman, Anna, Elizabeth and Christa Booman and Seth and Sarah Baker; four great-grandchildren, Emma, Jorja, Daniel and Micah; her sister, Martha Holum of Minot, N.D.; and her sister-in-law, Norma Lionberger of Eau Claire, Wis.
Justine was preceded in death by her husband, Rev. Paul Lionberger on June 27, 2010; her parents, Rev. James and Signe Holum; her sisters, Katherine Holum and Harriet Skoglund; and an infant daughter, Jane.
In lieu of flowers, memorials can be given to Luther College, c/o Development Office or Good Shepherd Lutheran/AAMPARO Fund.
Fjelstul Funeral Home in Decorah is serving the family. Online condolences may be made at www.fjelstul.com