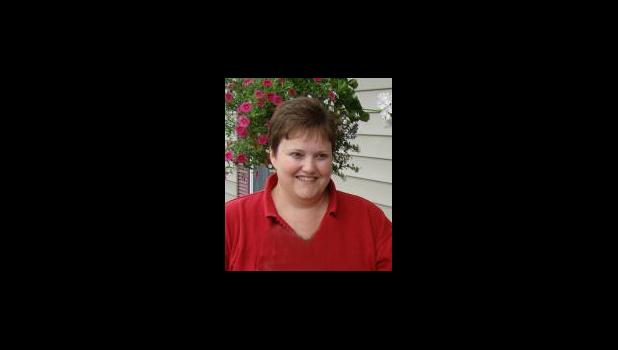 Charles City -  Kristin “Kristy” Marie Shultz, 47, of Charles City, Iowa, died unexpectedly  Friday, Dec. 16, 2016 at her home.
A funeral Mass for Kristy will be held 10 a.m. on Wednesday, Dec. 21, 2016 at Immaculate Conception Catholic Church in Charles City with  Reverend Gary Mayer officiating. Burial will be at 2:30 p.m. at Our Lady of  Lourdes Calvary Cemetery in rural Elma, Iowa.
Visitation will be held at Immaculate Conception Catholic Church from 4-7 p.m. Tuesday, Dec. 20, 2016.Visitation will continue one hour prior to the funeral Mass at the church on Wednesday.
Kristy was born Nov. 15, 1969 in New Hampton, Iowa, the oldest daughter of  Francis and Marge (Fangman) Ludwig. She was baptized and confirmed at  Our Lady of Lourdes in rural Elma. She graduated from Crestwood High  School in 1988 and received a Bachelor’s degree in Political Science  from UNI in 1993.
On Aug. 22, 1998, Kristy was united in marriage to Mark Shultz at Our  Lady of Lourdes Church. The couple was blessed with two boys, Nathan and Dylan. Kristy was very proud of her boys and took  extraordinary care in supporting them in all of their activities. There  were very few events she did not attend as their #1 cheerleader.
She will be remembered for her infectious smile, laughter at a good joke  or story, cross-stitching numerous projects, making caramels and sweets  at Christmas, giving prank gifts to her nieces and nephews, taking part  in a debate around the table and playing cards at family events.
Whether you were a new friend or an old friend, Kristy would always want  to visit and hear how you were doing. She had a big heart and was very  giving of herself as an active member and volunteer at Immaculate  Conception School and Church, Band Parents and 4-H Youth Committee.
Kristy was a huge NASCAR fan, especially of Jeff Gordon, and loved watching  races and football, especially Notre Dame and Vikings. She enjoyed  working in the office at Quade Construction.
Kristy is survived by her husband of 18 years, Mark; sons, Nathan  (15) and Dylan (13) of Charles City; mother, Marge Ludwig of Elma; sisters, Kathy (Dave) Hageman of Decorah, Iowa, Kari (Tom) Dunn of Elma and  Kim (Phillip) Ollendieck of Cresco, Iowa; mother-in-law, Hattie (Chuck) Pyatt of Charles City; nephews and nieces, Sydney, Shelby and Brody Hageman of  Decorah, Abby, Ben, and CJ Dunn of Elma and Robby and Reece Ollendieck  of Cresco; brothers-in-law, Dan (Laurie) Shultz of Omaha, Neb.,  James Shultz of Guthrie Center, Iowa; sisters-in-law, Jane (Joe) Tucker of  Charlotte, N.C., Sandy (Marlin) Eddy of Osceola, Iowa and JoEllen  (Bill) Bigelow of Des Moines; and many nieces and nephews-in-law.
Kristy was preceded in death by her father, Francis Ludwig;  father-in-law, Donald Shultz; paternal grandparents, Joseph and Mary  Ludwig; maternal grandparents, Quinten and Lucille Fangman; and several  aunts and uncles.
Our beloved wife, mother, daughter, sister, aunt, and friend will be  greatly missed by all. "Thank you for the years that you touched our  hearts." Kristy will never be forgotten.
In lieu of flowers, the family will be directing any memorials to causes  close to Kristy's heart and her sons’ on-going educations.
Hauser Funeral Home in Charles City is in charge of  local arrangements. Online condolences may be left for the family  at www.hauserfh.com .