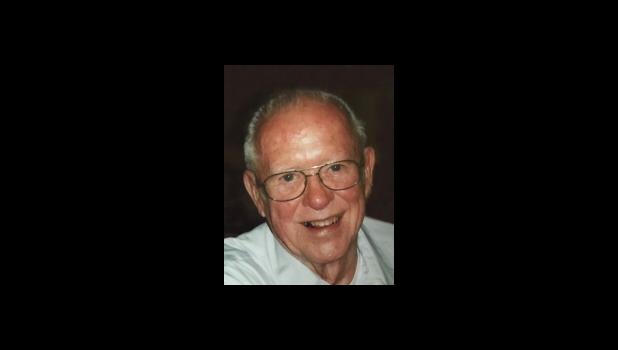 June 21, 1926 —
July 12, 2018
Lime Springs - Eddie G. Hughes, age 92, of Lime Springs, Iowa, passed away on July 12, 2018, at Evans Memorial Home in Cresco, Iowa.
Funeral services will be held on Thursday, July 19, 2018 at 11 a.m. at the United Methodist Church in Lime Springs. Friends may call from 5-7 p.m. on Wednesday, July 18, 2018 at Lindstrom Funeral Home in Cresco, Iowa, as well as one hour prior to services at the church. Burial will take place at Pleasant Hill Cemetery in Lime Springs.
Eddie George Hughes was born on June 21, 1926, at his mother’s family farm west of Preston, Minn., in Carimona Township. His parents, Ruth Elizabeth (Watts) and George Thomas Hughes, were married in 1925 and lived in Lime Springs with George’s parents, Steve and Hannah Hughes.
Eddie attended the Lime Springs public school and graduated from Lime Springs High School as valedictorian of his senior class in 1944. After graduation he joined the Navy program called Naval Aviation Ordinance, where he was taught to load planes with bombs and ammunition and then would fly as a gunner on a bomber. After completing Advanced Gunnery School in Purcell, Okla., he was asked to stay on as an instructor, which he did. He was stationed at Jacksonville, Fla.; Norman and Purcell, Okla.; Melbourne, Fla.; and Minneapolis, Minn., where he received his honorable discharge in April 1946. He returned home and worked as a mechanic at Fries Implement, where he had worked while in high school.
On June 8, 1949, Eddie was united in marriage to Gertrude Anne Collins, daughter of Claude and Florence Collins, at the Lime Springs United Methodist Church. To this union, six boys were born, James, Wayne, Jarold, Donald, David and Robert.
The Lime Springs United Methodist Church was an important part of Eddie’s life, from childhood on. He and Gertrude were life-long, active members of the church. He served on many committees and volunteered his time for many church projects. He always shared that he had many fond memories of his church and previous pastors.
In April 1950, Eddie began his postal service career, when he was appointed as a rural mail carrier on Route ‘2’ for Lime Springs. When he retired in December 1987, his route was 106 miles with 240 patrons. While being a rural mail carrier, he continued working for Fries Implement, and VanderBie Hardware, which was later owned by Jerry Ross and Arnold DeRuiter.
In later years, Eddie and Gertrude enjoyed wintering in Phoenix, Ariz. and Las Vegas, Nev. with friends and family.
He enjoyed woodworking and was always willing to help his boys with many projects. Having bought a new car every year for the mail route, Eddie was interested in cars and helping his boys with their cars. Eddie especially enjoyed a game of cards or cribbage with friends or family.
He was a devoted and loving husband and father, who will be missed by many.
Eddie is survived by sons, James (Penny) of Cresco, Jarold (Ronda) of Lime Springs, Donald (Cathy) of Aitkin, Minn., David (Trishia) of Baxter, Minn. and Robert (Julie) of Fort Dodge, Iowa; daughter-in-law, Julianne Hughes of Phoenix Ariz.; 17 grandchildren; nine great-grandchildren; and many extended family members.
Eddie was preceded in death by his wife, Gertrude; son, Wayne; his parents and grandparents; brother, Stephen; and sister, Nancy.
Memorials may be directed to the United Methodist Church, Lime Springs.