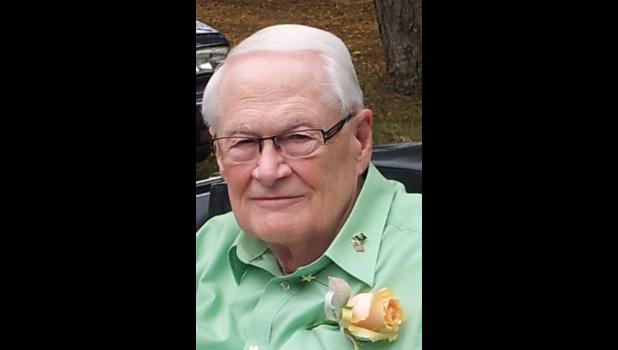 March 30, 1926 — Nov. 26, 2018
Sumner - Richard C. Haw, D.D.S., age 92, of Cresco, Iowa and formerly of Sumner, Iowa died on Monday, Nov. 26, 2018, at Regional Health Services of Howard County in Cresco.
Funeral services will be held at 11 a.m. on Saturday, Dec. 1, 2018, at United Methodist Church in Sumner with Rev. Michael Christie officiating. Burial will follow at Union Mound Cemetery in Sumner with military rites conducted by Thomas E. Woods Post #223, American Legion of Sumner. Visitation will be held from 4-7 p.m. on Friday, Nov. 30, at Becker-Milnes Funeral Home in Sumner and for one hour preceding services at the church on Saturday. In lieu of flowers, memorials may be made to the family for later designation. Online condolences may be left at www.beckermilnesrettig.com.
Richard Calvin “Dick” Haw was born on March 30, 1926 to William and Marie (DeWilde) Haw. He grew up in Davenport, Iowa.
As a young man, Dick enlisted in the United States Navy and saw combat on Iwo Jima and Okinawa, the Philippines and Japan as a Navy Corpsman attached to the advanced element of the 5th Marine Division. His experiences in the Pacific led to a commitment to help others living in third world countries. He went on over 20 mission trips, providing dental work to people in need, accompanied by his family, friends and colleagues. His calling to help others through mission work became a legacy that he passed down to his children and grandchildren.
Following his honorable discharge in 1946, he received his B.A. Degree from the University of Iowa in 1949. Dick would later receive his Doctor of Dental Surgery degree from the University of Iowa Dental School in 1955. He was a lifelong educator, beginning with teaching middle school and continuing at Hawkeye Community College’s dental hygiene program, adjunct professor at the University of Iowa and Oral Roberts Dental School. In addition to his role as an educator, he had a dental practice in Sumner, where he practiced for over 50 years.
Dick married the love of his life, Ruth Marie Murphy, on June 8, 1950. The love of nearly 66 years between them was an inspiring example of the love and bond of marriage. Through all the difficult times and moments of joy, they held each other up. Their dedication to each other was matched only by their dedication to their faith.
Dick was very involved in the community of Sumner, where he served for many years on the city council and various civic boards and was a long-time member of the United Methodist Church, where he was very active in Mission work and taught Sunday School, Thomas E. Woods Post #223, American Legion of Sumner, Sumner Rotary Club, where he was awarded the prestigious Paul Harris award for his service, staff member of Community Memorial Hospital, Shrine Club, Order of the Eastern Star, Masonic Lodge #374 of Oelwein, the American Dental Association, Iowa Dental Association, where he served four years on the State Membership Committee and four years on Council of Dental Care, the Waterloo Dental Society, Black Hawk Dental Society, Iowa Society of Dentistry for Children, Christian Dental Society, American Academy of General Dentistry and American Society of Clinical Hypnosis.
Dick is survived by his children, Rebecca (Mark) Bohle and Jeffrey (Shirlee) Haw; five grandchildren, Phillip (Kelsey Born) Bohle, Meghan (Robert) Ringoen, Katelyn (Kyle) Lensch, Tim Haw and Ashley (Tyler Hurley) Haw; five great-grandchildren, Jameson, Hayden, Roselyn, Meirick and Carter; and two sisters-in-law, Mardy Murphy and Marian Topp.
He was preceded in death by his parents; his wife; brother, Willis (Mary Fern) Haw; sister, Shirley (Ken) Westenberger; brother-in-law, Bob (Zae) Murphy; and brother-in-law, Lester Topp.