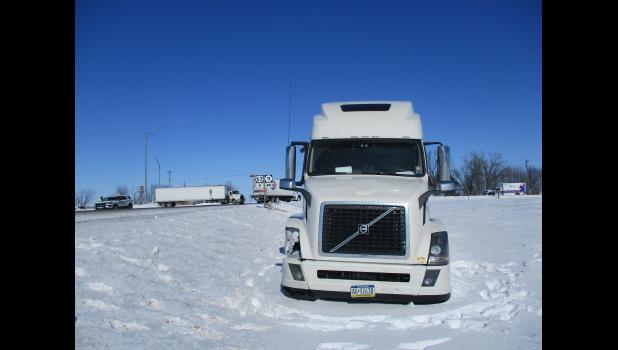 DAVIS CORNERS - On Thursday morning, Feb. 13, at 11:31,  The Howard County Sheriff’ Office received a report that two semis collided at Davis Corners (Hwy. 9 and 63 intersection).
George Khaburzania, 32, from Brooklyn, N.Y. was south bound in a 2015 Volvo semi tractor owned by Nexus Logistics, Inc. from Dobbs Ferry, N.Y. He failed to stop at the intersection and struck a semi that initially was traveling east-bound on Hwy. 9 and was turning north onto Hwy 63.  That semi was a 2004 International operated by 34-year-old Shane Struve from Clermont, Iowa and owned by Hall Robert’s Son, Inc. from Postville, Iowa.
Neither driver was injured but both were checked out by paramedics.
Both semi tractors received significant damage and had to be towed away from the scene.
Khaburzania was cited for fail to obey a stop sign.
Assisting at the scene was Iowa Motor Vehicle Enforcement, Cresco Fire and Rescue, Regional Health Services of Howard County Ambulance Service, Cresco Towing and Recovery, Harvey Towing, and Bill’s Towing.
Accident was under investigation by Howard County Deputy Tim Beckman