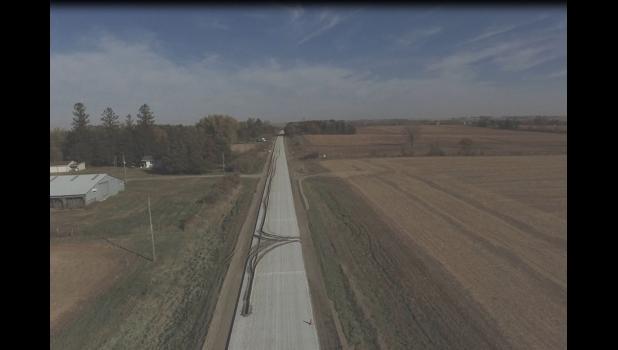 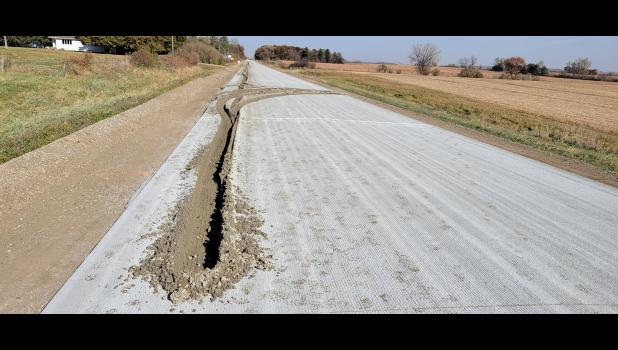 —Over 1/4 mile ruined near Chester, to cost over $250,000
By:
Marcie Klomp ~ News Editor tpdeditor@crescotimes.com
HOWARD COUNTY - On Friday, Oct. 21 around 8 p.m., a vehicle drove around the barricades and onto James Ave. south of Chester, which was in the process of being paved.
The vehicle came upon some wet concrete south of 25th street and drove into the wet concrete. The driver turned around and drove back north.  At some point, the front passenger tire was damaged.  The driver then returned to Chester.
An investigation by the Howard County Sheriff’s Office led to the discovery of the suspect vehicle at a private residence in Chester.  The owner of the residence gave law enforcement consent to search the garage. The vehicle was seized and towed to the Howard County Sheriff’s Office as evidence.
There was damage to 1430 feet of concrete.  Of that, 646 feet will only need grinding, and 576 feet will require full removal of one lane.  In addition, 178 feet will require full removal of one lane plus 18 inches of the other lane.  Approximately 30 feet will require full removal of the entire roadway. Croell estimated the damage over $250,000.
The investigation is ongoing and charges are pending.  More information will be released at a later date.
Concrete project update
The Howard County roads project is 8.25 miles long, with Chester for 7.13 miles, Lime Springs for 0.39 miles and 0.73 for the county. It starts on the southwest side of Chester, along James Ave. until it reaches 50th St. (A-23/Hayden Prairie Road). It goes west a half-mile to Jade Ave. and east four miles until it crosses Hwy. 63 and continues until it connects with Merrill St. in Lime Springs.
There were several days in early/mid October when the weather was too cold to work, but the unseasonably warm weather the last few weeks, including working weekends has allowed the project to move along quickly.
As of Monday morning, Oct. 31, the concrete was about halfway between Lilac and March Ave. Howard County Engineer Nick Rissman said the plan for the contractor was to connect with Hwy. 63 by end of day Tuesday. The next plan was to start on Merrill St. and pave toward Hwy. 63.
The next job will be fillets/handwork, which is getting the rest of the road and intersections smoothed out.
Fixing concrete
Tom Schmitt, General Manager of Croell Paving Division, said, “This is the worst and biggest drive-through in 25 years!”
The damaged concrete has already been torn out. An extra machine has to be brought in to finish the job.
Schmitt talked to the owners of the house just north of where the damage ended. He said he felt bad for them. The Dean Osborns could have been able to drive out of their yard within a few days of the concrete being laid. Now they have to wait 2-3 weeks more, before the job is done.
Although this is the worst drive-through in Croell’s history, Schmitt admitted, “This usually happens on at least one job a year.”
He added, “Please be aware. Obey traffic signs. We will prosecute to the fullest extent of the law when this happens.
“Deputy Rich Hollenbeck is doing a really, good job of investigating.”