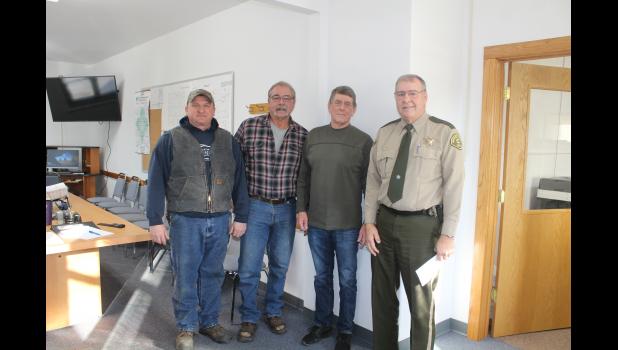 By:
Marcie Klomp ~ News Editor tpdeditor@crescotimes.com
Cresco - Howard County Sheriff Mike Miner informed the Board of Supervisors he would be retiring at the end of his term on Dec. 31. 2020.
“I’ve been with the Howard County Sheriff’s Office for 43 years, and I am currently the longest-serving employee. I spent 23 of those years as a deputy, nine as chief deputy under Mark Grinhaug and will have 12 years as sheriff at the end of the year.”
He mentioned many changes since he took over as sheriff 11 years ago. The department was involved with:
• Upgrades to the cameras at the courthouse include monitors in the Recorder, Treasurer, Auditor, Clerk of Court and Veteran’s Affairs offices. This is a great security measure for employees and visitors to the courthouse.
• All officers have body cameras.
• All squad cars are four-wheel drive and equipped with cameras, rifles and computers.
• Officers can now fill out paperwork from their cars. Other parts of the office have also gone paperless.
• Drug return boxes were set up in three places in the county, two in Cresco and one in Lime Springs. In the past 10 years, 1,500 pounds have been collected.
• In crime prevention, the D.A.R.E. Program was reinstated, a 911 Program was started, and a pedal car and goggles for alcohol prevention were purchased.
• Lime Springs had a bank robbery, and with the help of cameras installed in the town, the robber was caught within three hours.
• Cresco had a murder, and the department was involved with that.
•In the past six years, there were no fatalities in the county area due to car accidents, although there were two in the City of Cresco.
• “The Boards have been good over the years in keeping wages competitive with other counties.”
• For the past six years, the Sheriff’s Department has taken on Riceville.
• The biggest project was the new jail and sheriff’s office, which passed on the first vote.
Miner noted projects that he plans to complete by the end of his tenure:
~ Have an updated alarm system installed at the courthouse, engineer’s office and conservation office.
~ Get monitors working at the law enforcement center that include video from Notre Dame, Crestwood and Riceville cameras.
~ Patrol car video, where dispatch can turn on a camera located inside a sheriff’s vehicle if an officer doesn’t respond to the radio. This should be installed by mid-summer.
~ Miner hopes to get the McGruff program started again.
He concluded by saying things have certainly changed from when he first started. “In 1977, there were three officers, and one of them ran on the weekends. Now two officers are out every night.”
The Board thanked Miner for his service so far.