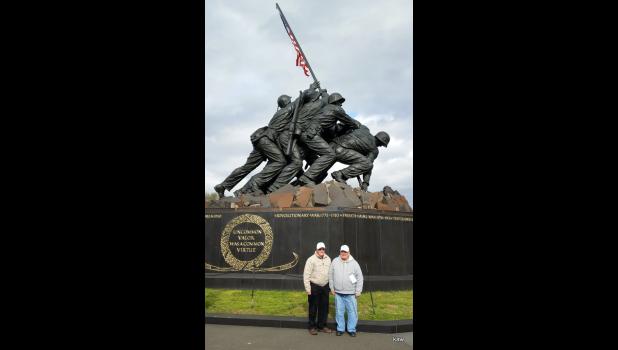 By:
Keith Williams
Washington, D.C. - Two veterans with deep roots in Lime Springs were on an Honor Flight to Washington, D.C., April 17. Gary Thomas and Keith Williams, Lime Springs High School class of 1955, were privileged to be among the 101 veterans on this flight, the 31st such flight organized by Eastern Iowa Honor Flight in Cedar Rapids.
Each veteran had a guardian on the flight. Thomas chose his son Ty, a former Marine himself. Williams wisely selected Ty’s wife, Donna, whose father was a Marine as well as her husband and son, while their daughter was in the Air Force. The Thomases have a deep history of serving the military of the United States of America!
Thomas began his military career by joining the Navy shortly after graduating from high school. After that stint and some time as a civilian, he enlisted in the Army. After his discharge from the Army, he served in the Army Reserve for many years. Now he is a retired military man!
While in the Reserves, Thomas was called to duty in Operation Desert Storm. He continues to be active in the Veterans of Foreign Wars (VFW) organization, having held several regional positions.
Originally, the planned trip included Gareth (Gary) Goetsch, Cresco High School Class of 1956. Unfortunately health concerns forced his withdrawal from this flight.
Goetsch and Thomas are second cousins, while Williams and Thomas are more distant cousins. As they are related and all were friends during high school, it was thought it would be unique and enjoyable for all to go together.
Goetsch was a career airman and served as an Air Traffic Control operator in the USAF. He spent time in England, Germany, Korea, and other countries — plus Texas, of course. In 1960, Goetsch and Williams were both stationed at Maxwell Air Force Base, Alabama. During one or more of his overseas tours, Goetsch’s wife, Mary, and children lived in the former grocery store in Bonair. It had been run by his grandparents.
Williams served four years.
Before their Air Force stints, Goetsch and Williams were students of the late Bud Weatherford, physics teacher in Cresco. He was a mentor to anyone interested in ham radio, and that’s how the friendship of Goetsch and Williams began. Both are ham operators and frequently remember, with affection, Bud and his sayings and actions. These days, both spend the winter months at the same RV park in Mission, Texas. The Goetsch family lives in Farmington, Minn.
Because of these interconnections, relationships and shared experience of serving in the armed forces, they thought taking an Honor Flight together would be a great experience!
The goal of the trip is to show gratitude to veterans by giving them a day which they will always remember. A tour of many of the military memorials or monuments in D.C. is the most visible aspect. This group filled four large tour buses, each with a knowledgeable tour guide. It was led by motorcycle police who raced ahead and stopped all traffic which might have slowed the group. Well, all traffic except the motorcade of Vice President Pence, that is. It was the only time the buses stopped for anything!
Main memorials visited were the World War II Memorial, Korean Memorial, Vietnam Memorial, including the famous wall of names, Marine memorial (statue of the raising of the flag on Iwo Jima), FDR Memorial and the Air Force Memorial.
A trip highlight was the visit to Arlington National Cemetery and witnessing the solemn ceremony during which one Honor Guard was relieved of his tour of duty by another member of the elite Honor Guard corps.
Aboard the plane, on the return trip, each veteran received a packet of mementos.  There was a nice plaque and a letter from Senator Joni Ernst.
There was also “mail call,” during which letters from well-wishers and school kids were distributed.
Most on the trip could never even imagine the life of a rock star, but the arrival back in Cedar Rapids treated each person as if they were one! The jetway was lined with uniformed officers there to welcome the returnees. The New Horizons Band was playing patriotic songs as the veterans entered the terminal. And once there, the travelers were greeted by hundreds, perhaps thousands, of well-wishers. Friends, relatives, Boy Scouts, civic groups, and neighbors turned out en-mass to welcome the troops home.
This was in stark contrast to the homecoming many originally received. In fact, many received very negative welcomes when they returned, especially those who returned from Vietnam.
The Honor Flight was extremely well organized and managed, with not one noticeable glitch. Thomas and Williams offer their heartfelt thanks to the volunteers who made this such a memorable day. They also urge any veteran to apply to go on an Honor Flight; it's a great experience.
On YouTube, there's a video of pictures and movies made of this trip here: https://youtu.be/2KO3uFkXNl4
Contributed by Keith Williams