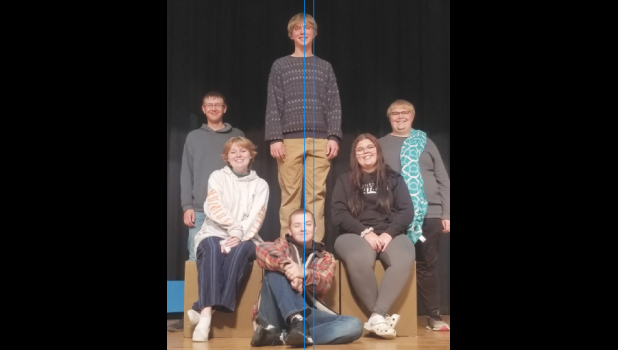 —You’re a Good Man, Charlie Brown
CRESCO - Everyone loves the Peanuts gang. Those Sunday comic characters will be live on stage this weekend at Crestwood High School Auditorium on Thursday and Saturday, Nov. 3 and 5 at 7:30 each evening and 2 p.m. on Saturday
Tickets can be purchased at the door, which opens one-half hour before the performance. Adult tickets are $5, with K-12 students are $3. No activity passes are honored.
It is a small but mighty cast of students who will portray the kids. They include:
• Charlie Brown — Brady Burke
• Sally Brown — Julia Loden
• Snoopy — Seth Lloyd
• Lucy Van Pelt — Alayna Larson
• Linus Van Pelt — Ben Matthias
• Schroeder — Connor Carter
Other major crew of the production are Gunner Ludeking and Emma Godman, who are understudies and tech crew. Director/Accompanist is Ms. Kim Lehmkuhl. Ms. Darcy Hendriks is Music Director/Assistant Director. The Technical Director is Mr. Luke Jansen.
Mr. Ferrie’s Manufacturing class built Snoopy’s doghouse and Schroder’s piano.
“The kids have been great to work with and have taken direction and critique quite well,” noted Lehmkuhl. “We had minimal conflicts, with athletics, so were able to have most of the practices after school. Ms. Hendriks has been a great asset and helped with the music side of the show, so a huge thank you to her!”