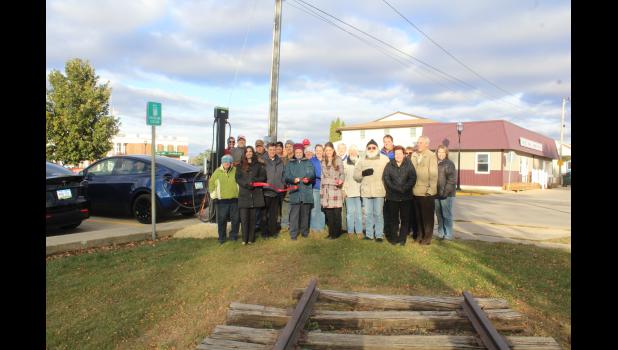 —Drivers can recharge themselves at restaurants, shops
By:
Marcie Klomp ~ News Editor tpdeditor@crescotimes.com
CRESCO - Cresco has joined a short list of area towns that has easy access to an EV (Electric Vehicle) charging station.
Besides having a public charging station at MiEnergy in Cresco, there is now one in the downtown area, in the southeast corner of Fareway’s parking lot. The location is close to Beadle Park, the shopping district and within walking distance to several restaurants.
This will allow EV drivers to recharge in more ways than one by being half a block from the shops and eating establishments of downtown Cresco.
A ribbon-cutting ceremony was held for the station on Monday, Oct. 17. Chamber members, City Council members, City administrators, a state legislator and the general public came to learn more about the EV charging station and to look over two Teslas (Jim Fritz and Zach Fromm), a Mitsubishi iMiEV and a Chevy Bolt (Brandon Schmitt).
City Council and Howard County Energy District member Amy Bouska was given the golden scissors to cut the ribbon. She thanked everyone for coming to the ceremony despite the cold temperature. She specifically mentioned Fareway for giving up two parking spots, Rep. Mike Bergan, Iowa DOT, Alliant Energy, Bob’s Electric, City employees and Cresco Chamber/Economic Dev. staff.
It was paid for with a grant from the Iowa DOT Volkswagon Settlement Environmental Mitigation Trust and the City paying for the remainder, along with upkeep.
She noted, “We are hoping this will bring people to Cresco. They can visit the shops and restaurants.” This could also make all of Howard County more inviting to visitors.
Locals were then encouraged to look over some of the electric vehicles on display.
Fritz explained why this Tesla is his second. “My first was a sports car. I am tall. This one is a compact SUV.”
He loves that it is quiet, fast and smooth. “There is no vibration. It is the best ride I’ve had,” he added. His vehicle goes 329 miles on a charge. He has learned to plan his long trips to two-and-a-half hours and stop to charge. “I’m getting older, and it’s a good length of time to stop, get out and stretch, go to the restroom or eat. We just make [charging] part of the trip.”
Fritz is also happy about how much storage the vehicle has. Since there is no motor, it has a deep front trunk as well as the back trunk.
Schmitt talked about how much he loved driving his 2021 Bolt. He purchased it because electric vehicles are the way technology is shifting. When he purchased it, he received rebates and discounts to help with the cost.
In addition, the cost of charging is less than gas. “On a trip to North Carolina, about 1,000 miles each way, it cost a total of $100 for electric.”
One of the downfalls of the electric is that some charging stations are not being maintained as well as others. He said the Tesla stations are kept up by the car company. The others are for the rest of the models.
Schmitt explained the Bolt can go 200-220 miles, or three-and-a-half hours. “The best time to charge it is from 20% to 80%. That takes about an hour and 20 minutes.” If a person tries to charge it any more, the charging ability slows down.
Just like Fritz, Schmitt says he plans his trips with an hour stop. During that time, he has gone to the restroom and got snacks, ate lunch, take time to watch a video or football game or just explored a town. He added most Walmarts have charging stations, so he will walk around the store as well.
“This is a great vehicle to drive. It has lots of power and is quiet. I just enjoy driving it.”
Bouska has an older model, a BEV (Battery Electric Vehicle) “It’s all electric, but it’s old compared to most EVs and isn’t made any longer. Back then, the cars’ ranges were really small. It has a range of about 65-70 miles, but even the 2014 Nissan Leaf had a range of only 75 miles. The technology has certainly improved!
“I love it because (a) it has huge space for hauling stuff, especially out to the yard waste site, and (b) I can do errands around town without feeling like I’m contributing to climate change. It’s a great little car!”
Other area towns with public EV stations are Decorah, with three and one on the way, Waukon, Saint Ansgar (two), Osage (two), Harmony, Mabel, Preston and Spring Valley. Anyone can look up online where the charging stations are located so a person can plan their trip at https://www.plugshare.com.