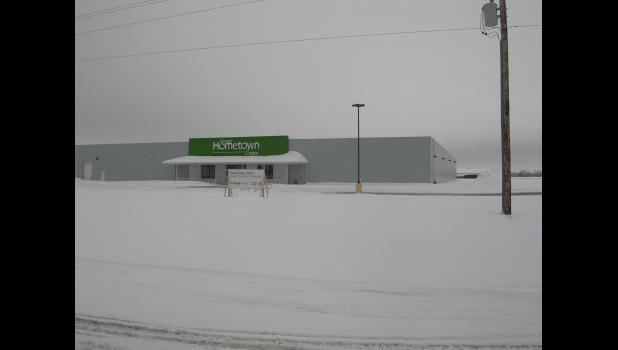 —Hy-Vee to tentatively open mid-summer
By:
Marcie Klomp ~ News Editor tpdeditor@crescotimes.com
Cresco - Howard County Supervisors learned officially of Hy-Vee’s Dollar Fresh store to open in Cresco’s old Shopko building on Highway 9 west. The tentative opening date is mid-summer.
Along with Cresco, it was announced over the past few days Dollar Fresh stores are going into Oelwein, Waukon, Dyersville, Hampton and Vinton. In addition, the stores opened at the end of 2019 in Toledo and Emmetsburg in Iowa and West Point, Neb.
Kacie Bonjour, Director of Real Estate, and Ryan Fitzpatrick, broker for Iowa Commercial Advisors, told supervisors, “Hy-Vee has a new concept in Dollar Fresh. It is put in smaller towns.”
She went on to say the stores are not like the larger stores. “They have the main groceries, produce, Wall of Value, a dollar section, ready-to-eat section and specialties. It will have shortcuts for families that include cut up fruits and floral.”
Howard County Economic Development Director Jason Passmore piped up, “And who services those flowers? Plantpeddler . . . located right here in Cresco.”
Bonjour then explained the new store will have meat but not a full-service meat counter and fresh baked goods but not a bakery section. They will, however, have a wine and spirits area. It will not have a pharmacy at this time.
The fuel saver program will be partnering with Casey’s.
The Dollar Fresh representative said there will be about 7-8 full-time employees along with 45 part-time.
In addition to the purchase of the building, Hy-Vee plans to put in $1.5 million into the property, “And that is on the low side,” Bonjour stated.
When it opens, hours will probably be 7 a.m.-9 p.m.
Starting wages will be about $9-10 for part-time and $15 for full-time. It was noted Hy-Vee is an employee-owned company. Bonjour added Hy-Vee is in favor of community involvement.
The company is hoping to have possession of the building by early March. It will then take time to bring in plumbing and utilities and start remodeling. “The outside will have work done as well,” Bonjour noted. “Our goal is to turn it as quick as possible.”
Hy-Vee Construction Division will send out bids for sub contractors.
The Howard County Board of Supervisors voted to give a 15 year tax rebatement to the company. That is five years more than the longest so far, but the board felt it was worth it with the company purchasing the building and putting more money into it.
This means the taxes paid to the county will be paid back to the company. This does not include school district, area school (Northeast Iowa Community College), hospital, ag extension and townships. Those funds will still be paid to those entities.
Many of the newer Dollar Fresh and Fast & Fresh Hy-Vee stores are going into former Shopko locations. Bonjour said, “Shopko buildings work for us. The size is about right. But there is remodeling that needs done.”
The company approached HCB&T late fall about the possibility of locating in Cresco. Bonjour shared, ‘When we approached, Jason is really easy to work with.”
Hy-Vee is a chain of over 245 supermarkets located in eight Midwestern states — Iowa, Minnesota, Wisconsin, Illinois, Kansas, Missouri, Nebraska and South Dakota. The first store was founded in 1930 by Charles Hyde and David Vredenburg in Beaconsfield, Iowa.
The company will go into the former Shopko building in Cresco. Shopko closed in May 2019. It’s grand opening was just three years earlier, on March 25, 2016.