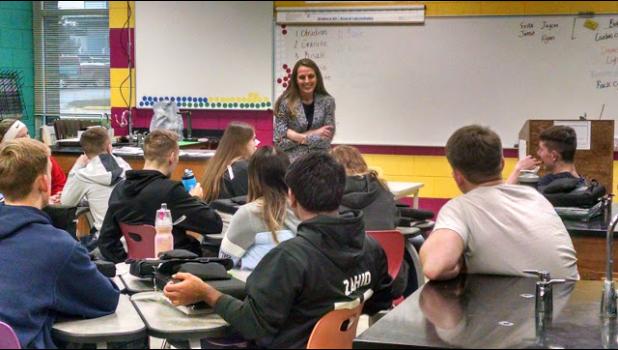 By:
HWCSD Public Relations
Howard County - Deborah Ihns, a 1980 graduate of Crestwood High School and sister of Howard-Winneshiek Superintendent Ted Ihns, and Director of Research and Development of Ecolab, Inc., in St. Paul, Minn., recently spoke to Crestwood students in Elizabeth Siepker’s chemistry classes.
Ihns said, “I spoke to three of Liz Siepker’s chemistry classrooms, sharing how my passion for chemistry and physics started.  It started in the very same classroom many years ago, with my high school chemistry teacher Mr. Darrell Sowers. Mr. Sowers had a love for chemistry and it was infectious.  He was a major factor in me pursuing chemistry in college that led to a career at Ecolab as a product development chemist.”
Students in Siepker’s class asked Ihns why she chose to go into the chemistry field, what students should know about the difficulty level of college chemistry classes, her job duties, post-secondary education, her interest in chemistry, and the most complicated or interesting thing she has developed.
Ihns said, “We talked about team work, research and development is a team of people where everyone contributes. We also discussed that in research and development you don’t fail.  Every attempt brings discoveries and information that gets you closer to success.”
Ihns said she thanked the students for the opportunity to speak to their classrooms.
“It was a pleasure talking about the numerous career options related to chemistry and sharing my career journey with the students,” she said. “In addition, I extended an offer to each student letting them know if they wanted to job shadow me for a day and tour Ecolab’s Research and Development Center in Eagan, Minnesota, that I would be glad to host them.”
Regarding Ihn’s visit, Siepker said, “The visit was great and I think many students got to hear and see the connection between chemistry and its real world applications. Students also got to ask questions regarding how to best prepare for the future and insight into the process of designing and developing new products. Overall, the presentation was well received by students and Deborah left them with a specially made engraved key chain that read ‘I [heart] chemistry’, ‘Go Cadets’. We are fortunate to have had this opportunity especially from a former Cadet graduate.”
Achievements
Deborah Ihns’ career recognitions include a Silver Patent Award Recognition as a co-inventor of 14 patents with two patents pending. She is the co-author of three publications/presentations, including Chlorine Free, Caustic-Free, Enzyme-Based CIP Cleaning on Dairy Farms, February 1995, National Mastitis Council; In Vitro Study of Germicidal Barrier Teat Dips Evaluated by a Modified ‘Excised Teat’ Assay Method, February 1994, National Mastitis Council and Effect of Temperature and Free Iodine on the Efficacy of Iodine Teat Dips, February 1993, National Mastitis Council.
She was the Excellence at RD&E Award recipient in 2001 and the Klenzade/Food Beverage Award of Excellence recipient in 1993.
Ihns grew up on a farm in Lime Springs, with two brothers and two sisters. She was a Howard County 4-H member for nine years, a member of the 4-H Council, and was awarded seven blue ribbons at the Iowa State Fair.
She graduated from Crestwood High School, where she was co-yearbook editor. She played and lettered in college volleyball, and graduated from Concordia University in St. Paul. Her family includes George; son Tony and his wife Cassie, grandsons Lucas and Finley, and daughter Rita.
Her interests include national parks, hiking, backpacking, photography, downhill skiing, travel, and spending time with family and friends.
About Ecolab
A trusted partner at more than one million customer locations, Ecolab (ECL) is the global leader in water, hygiene and energy technologies and services that protect people and vital resources.
With 2016 sales of $13 billion and 48,000 associates, Ecolab delivers comprehensive solutions and on-site service to promote safe food, maintain clean environments, optimize water and energy use, and improve operational efficiencies for customers in the food, healthcare, energy, hospitality and industrial markets in more than 170 countries around the world.
Follow Ecolab on Twitter @ecolab, Facebook at facebook.com/ecolab, LinkedIn at Ecolab or Instagram at Ecolab Inc.